OnePlus 10T 5G launching in India on August 3: Everything We Know So Far

OnePlus 10T 5G will debut in India on August 3. It will be powered by the Qualcomm Snapdragon 8+ Gen 1 SoC. 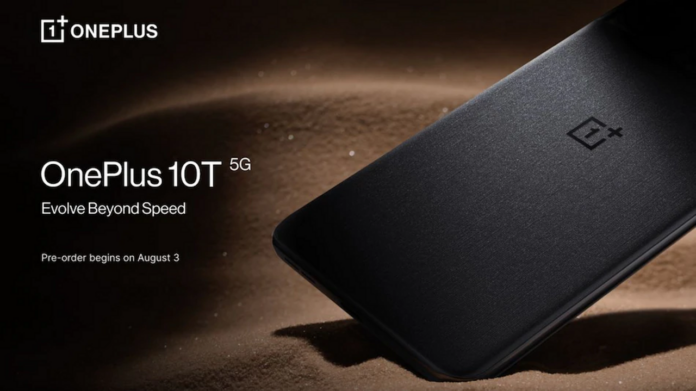 OnePlus 10T 5G launch will be held on August 3 at 7.30 PM IST during the company’s New York City event. The company is also going to unveil the OxygenOS 13 at the event. It will be an online event that will be live-streamed on YouTube.

Recently, the Amazon landing page of the OnePlus 10T also went live. It revealed that the smartphone will be available for pre-order on Amazon starting August 3. The handset has also been confirmed to be powered by the Qualcomm Snapdragon 8+ Gen 1 SoC. It is also confirmed that the phone will feature a 50-megapixel triple rear camera setup.

OnePlus 10T 5G is expected to be priced at Rs 49,999 in India for the base variant. We will know the exact pricing after its launch in the country. The phone is expected to come in Jade Green and Moonstone Black colours.

OnePlus 10T will launch without an Alert Slider

It was also recently revealed by Hope Liu, Chief Designer at OnePlus that the OnePlus 10T will launch without an alert slider and a Hasselblad branded camera module. He said OnePlus 10T is going to skip the alert slider this time to make internal space for other components that are needed for “high wattage charging, a large battery, and better antenna signal.”

He further said that the alert slider might seem like a very small component but it has a larger impact on the motherboard.

OnePlus 10T 5G will launch with a 6.7-inch AMOLED FHD+ 120Hz display that produces a 360Hz touch sampling rate. Further, the display supports HDR10+. Under the hood, the phone will be powered by the Snapdragon 8+ Gen 1 SoC, coupled with up to 12GB of LPDDR5 RAM.  Only the 8GB RAM/ 128GB storage and 12GB RAM/ 256GB storage variants are expected to launch in India.

The OnePlus 10T 5G will have a triple-camera setup on the back. It will have a 50MP Sony IMX766 primary sensor with Optical (OIS) and Electronic (EIS) image stabilization.

In addition to the main camera, the 10T 5G will have a 119.9-degree ultra-wide camera. There will also be a macro camera that allows us to zoom out and zoom in. The company also confirmed that the phone will get the company’s new image clarity engine. The company claims that it offers faster photo capture and better details.

The device will house a 4,800mAh battery with support for 150W fast charging. It will also offer other features such as dual speakers, Wi-Fi 802.11ax, Bluetooth 5.3, and NFC.  Lastly, it is expected to ship with Android 12 with OxygenOS 12 on top.