OnePlus Nord Buds CE launching on August 1: Here’s everything you need to know

Nord Buds CE will make its debut in India on August 1. This will be yet another addition to the Nord Product lineup of OnePlus. 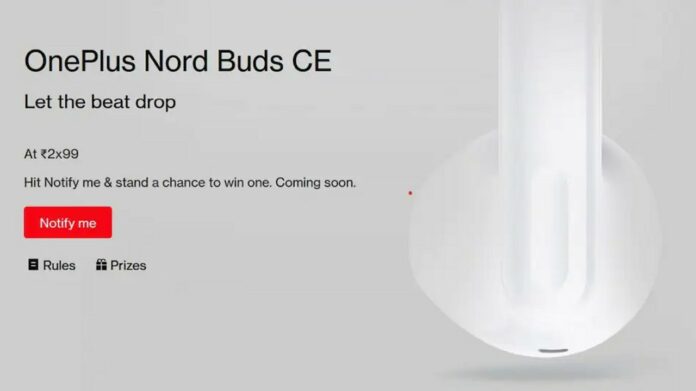 OnePlus is all set to launch a new pair of TWS earphones in India next month. The brand has confirmed to launch its new Nord Buds CE on August 1 in India. Here’s a look at its expected specifications, expected price in India and more.

OnePlus upcoming earbuds will also be sold on Amazon in addition to OnePlus India store and OnePlus stores offline. The teaser on the OnePlus website comes with a Notify me option. According to the brand, the earbuds will cost between Rs 2,099 to Rs 2999 in India.

To recall, the company launched Nord Buds in the country in April this year. It is expected that the Nord Buds CE to be priced between Rs 2,099 and Rs 2,499, since the Nord Buds is selling for Rs 2,599. OnePlus said that the new earbuds are going to be entry-level TWS earphones.

OnePlus is teasing the launch of upcoming TWS earbuds with the tag line ‘Let the beat drop’. The company said that the Nord Buds CE will bolster Nord’s hold within the entry-level TWS segment and aim to make the signature OnePlus audio technology and experience more accessible to a wider range of audiophiles across the country.

The other teaser shows that the Nord Buds CE will include a pebble-shaped casing that can both hold and charge the earbuds. They will be lightweight and will weigh less than 10 grams.

The earbuds will feature Bluetooth version 5.2 for connectivity. Other features will include a sound master equalizer, fast charge support and more.

OnePlus has said it will reveal more features in the coming days ahead of its launch on August 1. We will update this article when more details will be revealed.