OnePlus has officially confirmed the launch date as well as the design for its upcoming flagship, the OnePlus 10 Pro. 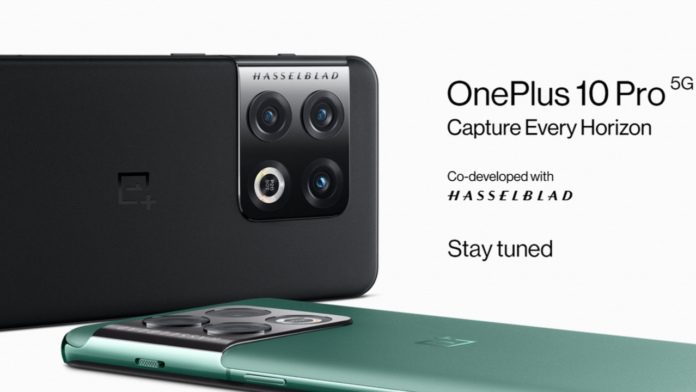 OnePlus is all set to bring its next flagship to the market and it is the OnePlus 10 Pro. The latest developments have now officially confirmed the design and the launch date for the smartphone. OnePlus has confirmed that the OnePlus 10 Pro is arriving on January 11 but only in China. A launch date for global launch is expected in March or February.

Apart from this, OnePlus CEO took to Weibo to post photos of the upcoming flagship. It also confirms that it will be coming in two colourways, including Volcanic Black and Emerald Forest (Green). Further, the design of the OnePlus 10 Pro stands in line with the leaks that came a couple of months ago. OnePlus US website has also been updated to showcase the new designs.

Apart from this, three cameras can be seen along with an LED flash ring and some text that confirms its a 50MP camera setup. The Hasselblad branding stays, identical to last year’s OnePlus 9 series. Moreover, we see a smaller than usual power button and an alert slider on the right spine of the smartphone. The front of the device still hasn’t been revealed yet.

As for the rumoured specifications, the OnePlus 10 Pro is said to sport a 6.7-inch 1440p QHD+ display with a 120Hz refresh rate. It should be powered by the Snapdragon 8 Gen 1 SoC. It can be expected to come with up to 12GB of LPDDR5 RAM and 256GB of UFS 3.1 internal storage. The device is said to pack a 5,000mAh battery with 80W wired fast charging and 50W wireless fast charging.