Nubia Red Magic 3 will be backed by a massive 12GB of RAM.

Nubia Red Magic 3 has now been officially confirmed to launch on April 28 in Beijing, China. The event will be held at the RNG eSports Center in Beijing. The announcement of launch comes via brand’s general manager, Ni Fei in a Weibo post.

Ni Fei in an earlier Weibo post teased some features of the upcoming smartphone. As per the teasers, the phone will feature liquid and air cooling that should ideally help in cooling the core temperature of the CPU during intense gaming sessions. It will be powered by the latest Qualcomm Snapdragon 855 processor along with Adreno 640 GPU. 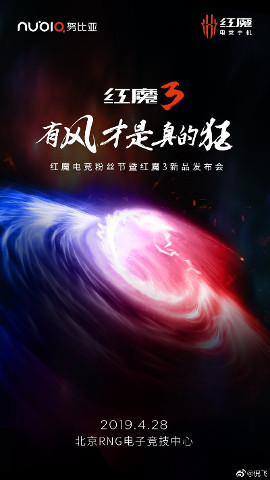 Nubia Red Magic 3 will be backed by a massive 12GB of RAM, which is similarly present in Black Shark 2 Gaming Phone. The phone is expected to support a screen refresh rate of 120Hz or more. The gaming phone will be equipped with a 3,800mAh battery and there will be a 4D vibration system that will provide better haptic feedback when you are playing games.

Nubia recently announced that it will be launching three new products - Red Magic 3, its flexible smartwatch, Alpha and nubia pods in May this year in the Indian market. The company introduced the Nubia Alpha smartwatch and Nubia Pods wireless Bluetooth earbuds during the Mobile World Congress (MWC) 2019.

Nubia Alpha smartwatch features a flexible display which basically bends along the wrist of the wearer just like a normal watch. The Nubia Alpha smartwatch is powered by a Snapdragon Wear 2100 SoC along with 1GB of RAM and 8GB of internal storage. The Nubia Pods are the company's first wireless ear buds, and they weigh only 6.2 grams. The Nubia Pods wireless Bluetooth earbuds come loaded with Bluetooth 5.0, AAV HD audio and Qualcomm aptX audio support.

Nubia Red Magic 3, flexible Alpha smartwatch and Ear Pods to launch in India in May