Netflix has introduced the Two Thumbs Up button on its platform so you can tell Netflix how much you love a show or a movie. 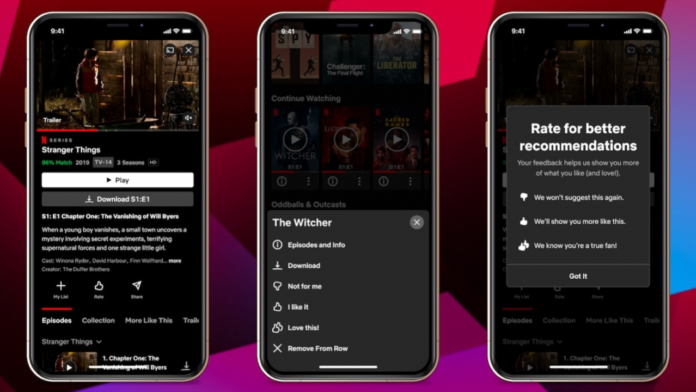 Netflix on Monday announced a new rating system for the titles available on its platform where it has introduced a new ’Two thumbs up’ button for the titles available to stream on its platform. Now, users will have three options to choose from when they want to express their thoughts about a show or a movie, including a Thumbs Down button, Thumbs up button and a Two Thumbs up button.

While pressing the thumbs up button shows that you like the show or the movie, the Two Thumbs up button will denote a greater satisfaction for the title. “Our current Thumbs Up and Thumbs Down buttons are a good way for you to tell us how you feel about a series or film, and in return, you get a profile that’s better personalized to your taste. However, we’ve learned over time that these feelings can go beyond a simple like or dislike.  Providing an additional way to tell us when you’re really into something means a profile with recommendations that better reflect what you enjoy,” Netflix’s director of product innovation Christine Doig-Cardet said in a blog post.

Previously Netflix had a star-based feedback system in place that allowed viewers to rate shows and movies with 1 to 5 stars. However, it was replaced with a thumbs-up or thumbs-down system and now, the streaming giant is adding the two thumbs up.

In recent news related to Netflix, it launched three new games on its platform. This Is A True Story, Shatter Remastered, and Into the Dead 2: Unleashed are the three new mobile games that are made available for both Android and iOS users.