The smartphone will be powered by 2.19 GHz quad-core processor.

According to the GeekBench listing, the LGE LGUS997 got 1639 points in single-core test and in muli-core test it received 3504 points. Further, the LG smartphone has 4GB RAM along with Qualcomm MSM 8996 2.19 GHz quad-core processor. The handset is based on the Android 7.0 Nougat operating system. 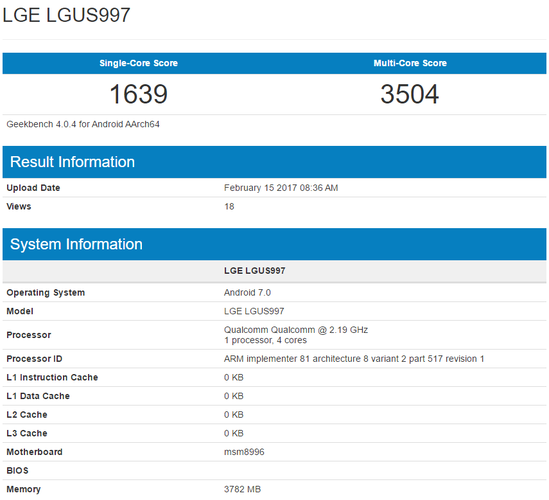 Currently, LG sells LG V20 and the LG G5 for the US cellular users with Snapdragon 820. It is yet unknown whether the new spotted device will be altogether a new handset or just another variant of LG V20 or the LG G5.

Meanwhile, LG is all set for the launch of LG G6 on February 26th during Mobile World Congress (MWC), which will be held in Barcelona later this month. The LG G6, will sport a 5.7-inch QHD display along with new LG UX 6.0 specifically designed to maximise the advantages of the new FullVision display.

The 5.7-inch Quad HD display on the device will boast a screen resolution of 2880 x 1440 pixels coupled with an unusual screen aspect ratio of 18:9. The phone will come equipped with a feature that will users to view existing 16:9 ratio content in 18:9 format. The smartphone will come with an ergonomic design to ensure comfort and compatibility with existing and upcoming digital content.