The operator has introduced services in Andhra Pradesh with a promotional tariff of half a paisa per second. 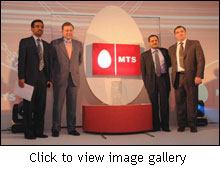 MTS, the CDMA mobile services brand of Sistema Shyam Teleservices (SSTL), announced the launch of its services in Andhra Pradesh. Andhra Pradesh is the 12th telecom circle where MTS services will be available. With the launch of its services in the Andhra Pradesh circle, MTS has now covered all the four South Indian states.
The services have been launched at a promotional tariff of half a paisa per second while calls within the MTS network in Andhra Pradesh will be charged at one paisa for every four seconds.
Suresh S Kumar, chief operating officer of Karnataka and Andhra Pradesh, said in a statement, “With our presence in 557 towns in the state, we hope to reach subscribers through our branded stores and mass retail outlets with an aggressive strategy for tapping the mass market, as well as corporate customers.”
SSTL is a joint venture of Sistema of Russia and the Shyam Group of India, and is licensed to provide mobile telephony services in all the 22 circles across the country. It has over four million subscribers in 12 circles where it currently operates.