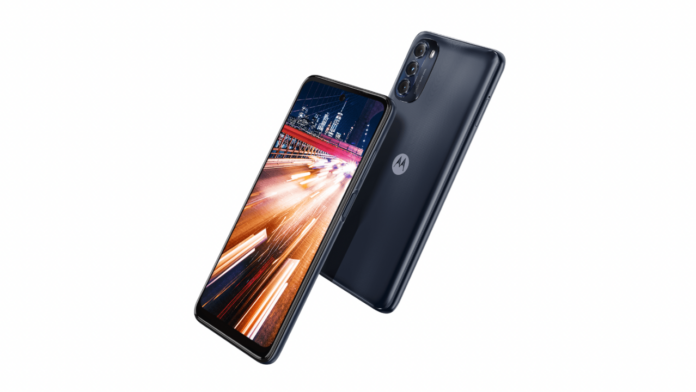 Motorola’ ever-expanding G series devices will soon get a new smartphone called the Moto G82. The specifications, as well as the renders for the Moto G82, have now been leaked suggesting it will be a 5G smartphone that will be equipped with a Snapdragon processor. Moreover, it will have a triple camera setup at the rear.

The leak from 91Mobiles citing tipster Evan Blass as the source says that the device is currently codenamed Rhode 5G+. The Android 12-powered 6.55-inches will come with a pOLED display (FHD+, 402PPI, 120Hz refresh) that has an almost 88% of screen-to-body ratio.

It is powered by the Snapdragon 695 5G from Qualcomm and will ship in three memory configurations. These variants will have 128GB of internal storage, and various RAM options including 4GB, 6GB, or 8GB of LPDDR4x RAM. It will pack a 5000mAh battery with a 33-watt wired QuickCharge, power button-embedded fingerprint sensor, 3.5mm headphone jack and will have an IP52 ingress protection rating.

For optics, the device will have a 50-megapixel main camera, an 8MP combined wide-angle and depth of field cam, and a 2MP macro shooter, plus a 16MP selfie camera upfront. Another recent Moto G series smartphone that got launched in India was the Moto G52.

It features a 6.6-inch full HD+ OLED display with 2400 x 1080 pixels resolution. Further, the display comes with a 90Hz refresh rate and a 20:9 aspect ratio. Moto G52 packs the Snapdragon 680 SoC which is paired with up to 6GB of RAM and 128GB of storage. In addition, the storage is expandable up to 1TB via a microSD card. Further, it comes with 3GB of virtual RAM.