Moto E32s smartphone is said to be exclusive to the Indian smartphone market. It will come in a Slate Gray colour. 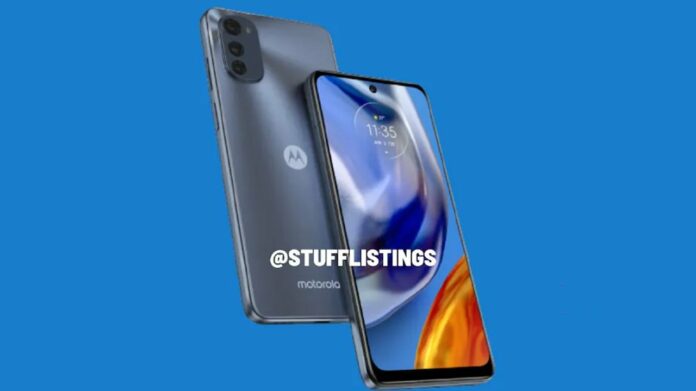 Earlier this month, Motorola launched the Moto E32 in the global market. Now the company is working on Moto E32s smartphone which will reportedly launch in India soon.

As per tipster Mukul Sharma, Motorola will be launching the Moto E32s on May 27th in the Indian market. He also mentions that the Motorola E32s will be exclusive to the Indian smartphone market. In addition, he has also revealed the design and key specifications of the upcoming phone.

The shared image shows that the device will come in a Slate Gray colour. There will be a centrally-aligned punch-hole display on the front. At the rear, the phone features a triple camera setup with an LED flash in the upper left corner. Additionally, the Motorola branding also lies at the back.

The power and the volume rocker button are on the left side of the smartphone. At the bottom, there seems a speaker grille, 3.5mm headphone jack, and a UBS Type-C port.

For the specs, the tipster says that the Moto E32s will feature a ultra slim and stylish look. It will come with a 6.5-inch IPS LCD display with a 90Hz refresh rate. Further, the phone will run on Android 12-based OS out of the box.

To recall, Moto E32 comes with an IPS LCD display with a 720 x 1600 pixels resolution and a 90Hz refresh rate. It is powered by the Unisoc T606 processor with 2GB of RAM and 32GB of storage.

The Android 11-powered device packs a 5000mAh battery with 18-watt wired QuickCharge support.  For optics, the device has a 16-megapixel main camera, a 2-megapixel depth sensor, and a 2-megapixel macro shooter, plus an 8MP selfie camera up front.