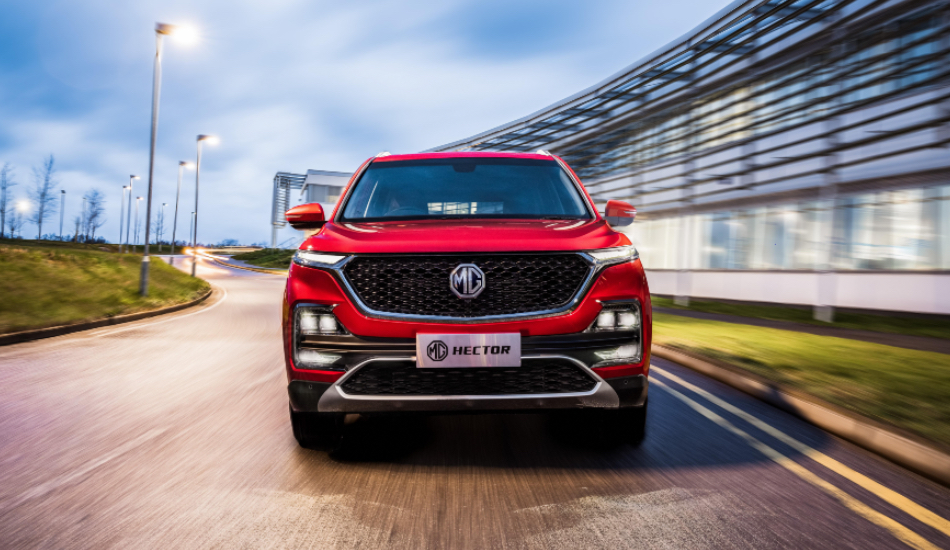 The MG Hector has now received an official price tag in India and will be available from Rs 12,18,000 to Rs 16,88,000 . Users will be provided 5 years of manufacturer warranty for unlimited kilometres, round-the-clock roadside assistance and no labour charges for the first 5 services under the MG Shield ownership package.

British Automaker MG (Morris Garages) Motor has officially launched the MG Hector Internet Car in India which will be available for an introductory starting price of Rs 12,18,000 (ex-showroom, New Delhi). The MG Hector with iSMART Next Gen will come in a total of 11 combinations across 4 variants – Style, Super, Smart and Sharp; alongside three engine options – Petrol, Petrol Hybrid and Diesel; and in manual and automatic transmissions.

Roughly three months after its official announcement in April, the MG Hector has now received an official price tag in India. As an introductory offer, the car will be available from Rs 12,18,000 to Rs 16,88,000 (ex-showroom, New Delhi). Users will be provided free-of-charge 5-year comprehensive manufacturer warranty for unlimited kilometres, 5-year round-the-clock roadside assistance (RSA) and no labour charges for the first 5 scheduled vehicle services, all of which will come under the MG Shield ownership package.

Additionally, the company is offering prepaid maintenance plans starting as low as Rs 8,000 for the first three years of ownership. MG says Hector’s total cost of ownership (TCO) is the lowest in the segment at 45 paise/km for petrol and 49 paise/km for diesel. Besides that, MG is also providing a “3-60” resale plan by teaming up with automotive portal CarDekho. This will offer users 60 percent residual value upon completion of three years of ownership.

MG India has also tied up with Myles to offer the HECTOR on a subscription basis in select metro cities including Delhi, Mumbai and Bangalore in the next quarter.

MG Hector will come with an iSMART Next Gen technology which will feature a 10.4-inch screen with touch and voice controls. iSMART Next Gen will feature an embedded M2M sim which will make the car an always-connected vehicle. The feature has been developed by Unlimit, Cisco and Airtel which have worked on a solution based on Internet Protocol Version 6 (IPV6) technology which is ready for 5G. The Always-connected feature allows users to receive real-time software, entertainment content and application updates. Customers will be able to download software updates immediately or schedule them for later.

The car comes with 25 safety features and has LED daytime running lights, panoramic sunroof, 360-degree camera, cruise control, electrically adjustable front seats and heated ORVMs. The HECTOR is also the first car in its segment with a sophisticated mild-hybrid architecture that uses a 48-volt lithium-ion battery to store energy and provide extra torque assistance of up to 20 Nm.

MG Hector has already received 10,000+ bookings in the last 23 days after pre-orders for the car went live on June 4. Pre-booked customers will receive their MG Hector in the first week of July through the company’s 120 centres across India.

The prices of the 11 combinations of MG Hector across the Style, Super, Smart and Sharp variants have been listed below. Users can choose between manual and automatic transmissions and from three engine options – Petrol, Petrol Hybrid and Diesel.

Speaking about the launch, MG Motor India President and Managing Director, Rajeev Chaba said “As MG’s first product for the Indian market, the HECTOR comes with ‘MG Shield’, a first-of-its-kind package in the Indian auto industry which provides complete assurance to our customers, as we continue to remain focused on disruption & differentiation. With the very distinctive design that also packs in safety, best-in-class features and competitive pricing, the MG HECTOR will make an impact with buyers who are looking for something very different from the normal array of cars”.