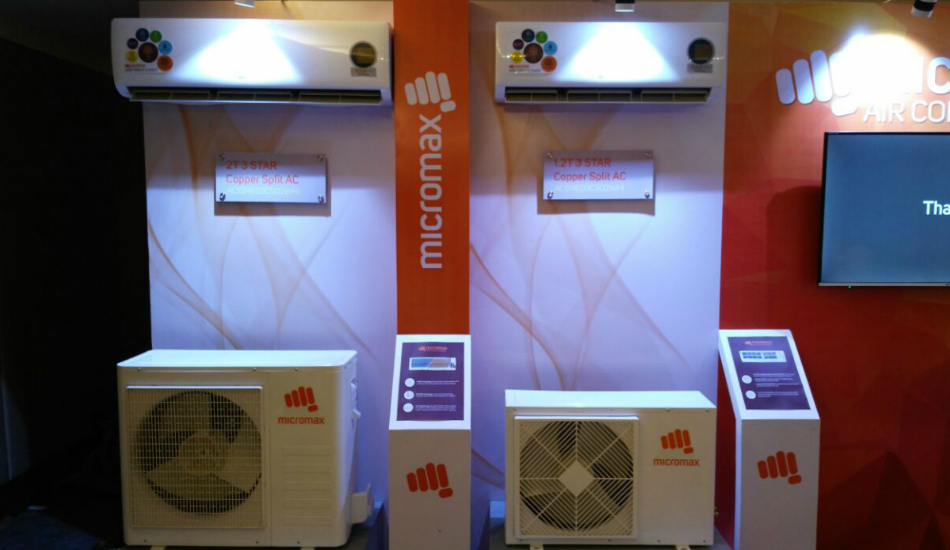 The company has launched four new ACs in the Aura series and four in the Waves series. The air conditioners will come with a price range from Rs 20,000 to Rs 37,000.

Micromax has today announced two new series of air conditioners, Aura and Waves, in India. The company has launched four new ACs in the Aura series and four in the Waves series. The air conditioners will come with a price range from Rs 20,000 to Rs 37,000.

Under the Aura series, the company has launched a model with 1.2 tonnage capacity (TR) which comes with 3-star rating, 1.5 TR with 5 star rating, 1.5TR with 3 Star rating and 2.0 TR with 3-star rating. All the ACs comes equipped with 100 per cent expect the 1.5TR 5 star AC which comes with PFC build. Coming to the Waves series, the windows ACs comes with 1.5 tonnage capacity and comes in four variants with two comes in 3 stars rating, while two have 5 stars rating.

There is a two-way drainage system in the split ACs, which allow users to install an AC from both sides without much hassle. All the ACs from Micromax comes equipped with 3 in 1 Health + Filter which include anti VOOC (volatile organic compounds) filter, which clears the odour from the room; Vitamin C filter, which helps softens one’s skin and reduces stress; and Catechin Air filter which prevents the spread of bacteria and harmful viruses in the room.

The split ACs comes equipped with a 4-way swing, which gives a uniform cooling throughout the room. Other than this both the series features Turbo Cooling mode for a faster cooling, dehumidification that maintain humidity level automatically, auto cleaning, 24-hour timer, auto restart, quiet operation, self-diagnosis and sleep mode and R22 cooling gas.

The company is offering 5 years of warranty and it also providing first three services for free. In order to give an efficient after-sales support, the company has come with a Micromax Home Assist app, through which one can register a complaint request without many hurdles. The company says that request will be answered within 24 hours.