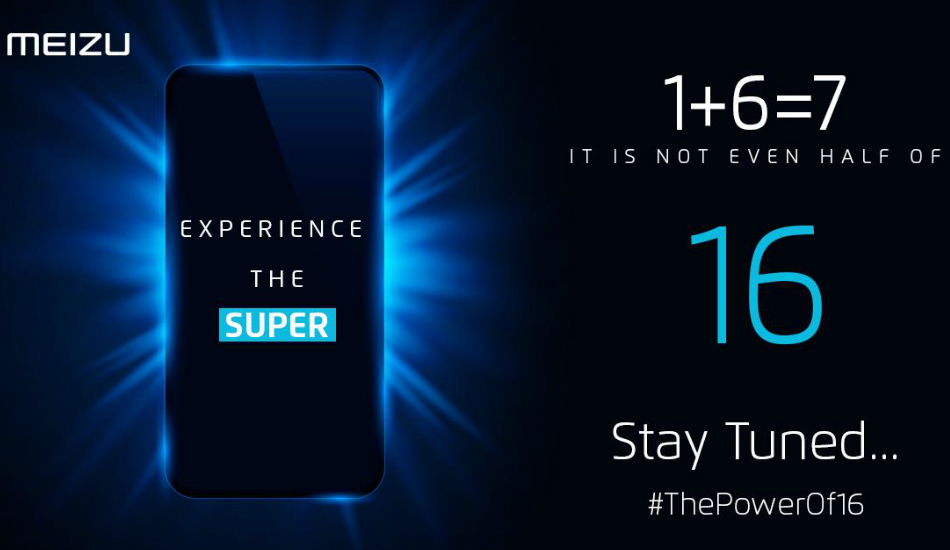 The news comes from Meizu India who has taken to Twitter to post a series of teasers for their upcoming flagship smartphone. The official account’s header has been changed to display the hashtag “#ThePowerOf16” while the texts read out loud that “Super is coming”.

After several months of absence in this region, Meizu launched its flagship Meizu 16th and Meizu M6T in India in December last year following it up with the introduction of the entry-level Meizu C9 smartphone, Meizu Pop true-wireless earbuds and EP52 Lite wireless earphones. The company has now revealed that it’ll soon launch another smartphone in India and it’ll probably be another flagship device.

The news comes from Meizu India who has taken to Twitter to post a series of teasers for their upcoming flagship smartphone. The official account’s header has been changed to display the hashtag “#ThePowerOf16” while the texts read out loud that “Super is coming”. Meizu has also gone on to lengths to mock OnePlus with another tweet which reads “1 + 6 = 7. It is not even half of 16”, surely confirming that their new phone is expected to rival that of the OnePlus 6.

Are you super excited for the SUPER? Hold on guys! pic.twitter.com/SFkLhuZkrK

Having already released the Meizu 16th in December, it remains to be seen how Meizu named this “ThePowerOf16” device. Reports suggest this could be the Meizu 16s with improved specifications in contrast to the Meizu 16th including the addition of a Snapdragon 855 chipset and a 6.76-inch AMOLED display with bezels whatsoever. The device is also expected to equip an in-display fingerprint scanner for the first time and a 48MP camera with OIS for users with photography in mind.

For those of you didn’t know, Meizu launched its last flagship – the Meizu 16th for a price of Rs 39,999 in India. The device features a 6.0-inch Full HD+ Super AMOLED display with a resolution of 2160 x 1080 pixels. It’s powered by a Qualcomm Snapdragon 845 processor along with Adreno 630 GPU, 6GB of RAM and 128GB of internal storage, which can be further expanded up to 128GB via microSD card slot.

On the camera front, it features a dual-camera setup with a combination of 12-megapixel wide-angle lens with Sony IMX380 sensor, f/1.8 aperture, laser auto-focus and a 20-megapixel telephoto lens with Sony IMX350 sensor and f/2.6 aperture. For the front, there is a 20-megapixel shooter with an f/2.0 aperture. The phone is backed by a 3010mAh battery with mCharge fast charging support and runs on Android 8.1 Oreo, which is based on Flyme OS. It comes loaded with anin-display fingerprint sensor.