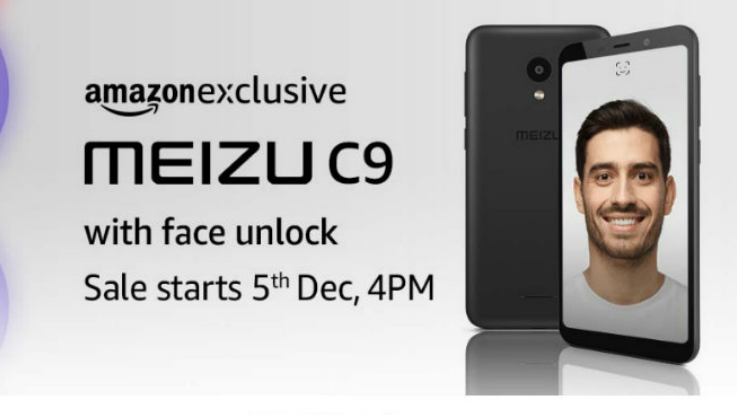 Meizu has today announced the launch of its latest budget-centric smartphone in India. Dubbed as Meizu C9, the phone comes with a price tag of Rs 4,999 and it goes on sale on Amazon starting from today at 4:00 PM.

As per launch offers, Reliance Jio users will get Rs 2,200 cashback and 50GB of additional data.The latest smartphone from Meizu comes loaded a host of interesting features. The device runs on Android Oreo, which gives close-to-stock look and feel. The phone is equipped with a unibody design and it is equipped with face unlock feature as well.

The Meizu C9 comes loaded with a 5.45-inch HD+ display with a screen resolution of 1440 x 720 pixels coupled with an 18:9 aspect ratio and 295ppi pixel density. The phone is powered by a 1.3GHz quad-core processor along with 2GB of RAM. The phone is backed by a 16GB of internal storage, which can be further expanded up to 128GB via a microSD card slot. Considering the specs, the smartphone will compete against the likes ofHonor 7S, Micromax YU Ace, Xiaomi Redmi 6A, Infinix Smart 2 and Panasonic P85 NXT.

For optics, the Meizu C9 features a 13-megapixel rear camera with f/2.2 aperture and LED flash. For the front, there is an 8-megapixel shooter with f/2.2 aperture. The phone is backed by a 3000mAh battery and on the connectivity front, it supports 4G VoLTE, Bluetooth 4.1, WiFi, GPS, GLONASS, dual-SIM, 3.5mm headphone jack and micro USB port.