The Pro 7 currently comes with either the Helio X30 or the Helio P25 chipset.

Meizu recently launched its flagship smartphones, the Pro 7 and Pro 7 Plus in China as the first MediaTek Helio X30 smartphones globally. The Pro 7 comes with either the Helio X30 or the Helio P25 while the Pro 7 Plus sports only 10nm Helio X30 processor. Now, seems the company will be bringing a Snapdragon version as well in coming days as the Meizu Pro 7 has been spotted on a GeekBench benchmarking website with the latest Qualcomm Snapdragon chipset.

In the GeekBench listing, the Meizu Pro 7 got 1969 points in single-core test and in multi-core test it received 6536 points. As per the listing on Geekbench, the Meizu Pro 7 has 6GB RAM and Qualcomm Snapdragon 835 1.90 GHz octa-core processor. The handset is based on the Android 7.1.1 Nougat operating system. 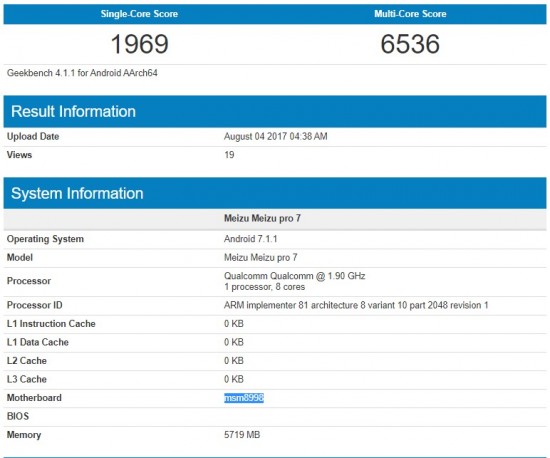 Whether Meizu will be coming out with the Snapdragon 835 variant or not, we will never know until we see more leaks in coming days. However, we advise our readers to take this information with a grain of salt as the company is yet to confirm anything regarding the new variant.

The major highlight of the smartphones are the dual screens which display information like notifications, weather, time, music and more. The second screen can be also used for taking selfies with phones’ rear cameras. Both the phones have a 1.9-inch secondary Super AMOLED display with a pixel density of 307ppi. Another major highlight of both the devices are the dual rear cameras which come with a combination of 12-megapixel sensors out of which one is used to taking monochrome pictures, while other captures RGB colours. The cameras further come with aperture f/2.0, 1.25-micron pixel size, Sony IMX386 sensors, PDAF and dual-tone LED flash. For the front, both the devices sports a 16-megapixel shooter for selfies and video calling.

The Meizu Pro 7 features a 5.2-inch Full HD Super AMOLED display with a screen resolution of 1920 x 1080 pixels. The smartphone comes in two processor variants: one is powered by an octa-core MediaTek Helio P25 processor along with Mali-T880 GPU, while the other sports a deca-core MediaTek Helio X30 processor with PowerVR 7XTP-MP4 GPU. The phone is backed by a 4GB of RAM and comes in 64GB and 128GB storage variants.