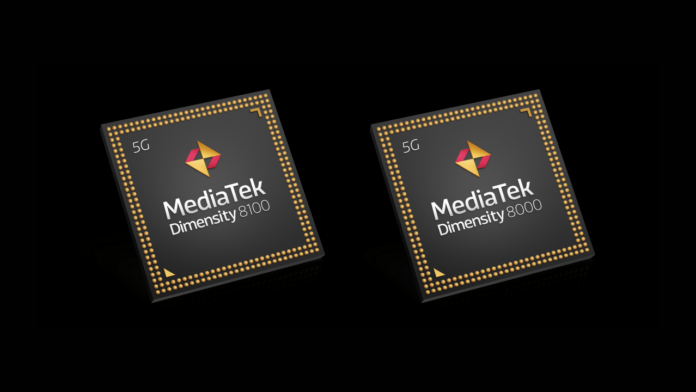 MediaTek has announced new chipsets further widening its product portfolio for smartphone brands. Amongst the new chipsets, there are Dimensity 8100, Dimensity 8000 both of which are built on TSMC’s 5nm process. The Dimensity 1300 came as a surprise that is rumoured to first feature on OnePlus Nord 2T. The new Dimensity 1300 is also built by TSMC on its 6nm process.

The Dimensity 8000 and the 8100 integrates MediaTek’s fifth generation AI processing unit, APU 580. The chips support for up to 200MP cameras and 4K60 HDR10+ videography. They get MediaTek’s latest noise reduction and AI-based unblur techniques in extreme low-light environments and support simultaneous dual camera HDR video recording. Users can record with the front and rear cameras or two different rear lenses – for example, wide + tele – at the same time.

MediaTek also added the 6nm Dimensity 1300 to its 5G family. The Dimensity 1300’s HDR-ISP supports up to 200MP, and integrates MediaTek’s HyperEngine 5.0 to offer an optimal balance between performance and power. It comes with new AI enhancements, improving night shot photography and HDR capabilities for image clarity.

The Dimensity 1300 integrates an octa-core CPU with an ultra-core Arm Cortex-A78 clocked up to 3GHz, three Arm Cortex-A78 super cores and four Arm Cortex-A55 efficiency cores, along with an Arm Mali-G77 GPU and MediaTek APU 3.0 to support the latest AI capabilities.

Smartphones powered by the Dimensity 8100, Dimensity 8000 and Dimensity 1300 will be available in the market in the first quarter of 2022.