Kodak CA TV vs Mi 4X TV: Which one is better?

Kodak just announced their new Koadak CA Smart TV line up. It is a direct competitor to Mi's 4X TV and so we compare them so that you can make the right purchase

Kodak just announced their budget smart TV line up called the Kodak CA Smart TV series up. The TV’s come in 43”, 50”, 55” and 65” with the base price starting for INR 23,999 for the 43" variant. Kodak has partnered with Indian consumer electronics maker Super Plastronics Pvt Ltd (SPPL) to launch its latest Smart TV lineup. They run on Android TV OS and is certified by Google. The line up goes right up against MI’s 4X TV line up which starts at INR 24999 and comes in similar sizes to the Kodak. So which one should you get for the best home entertainment experience? Our comparison will help you make the right choice.

The Kodak CA approaches a very bezel display design and is the first bezel-less television manufactured in India and has been produced in our Noida factory. The stand is a two-piece unit and attaches to the bottom of the TV. The stands have a metallic finish which looks premium.

The Mi 4X has slightly bigger bezels around the TV but nothing hideous. The stand’s design is similar to the Kodak but lacks the metallic finish. 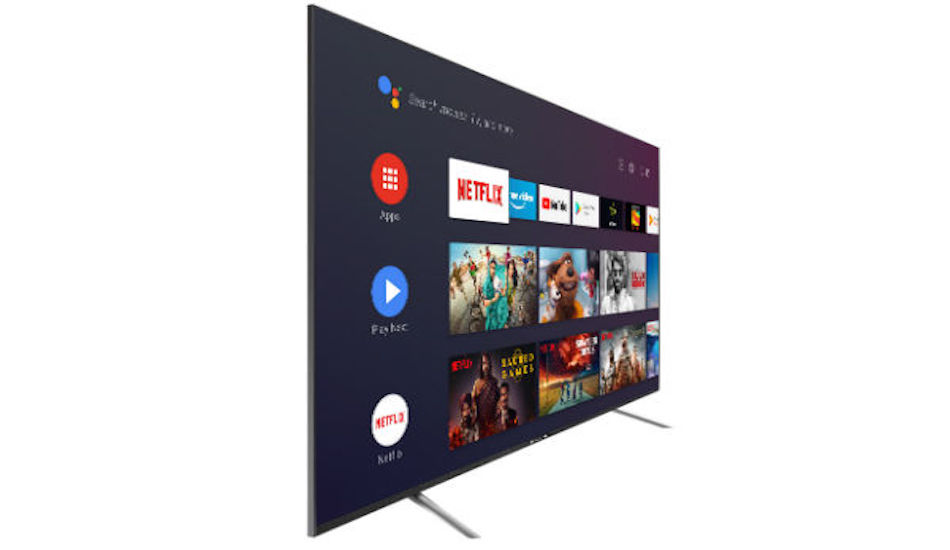 Winner: Kodak- The thin bezels make up for an uninterrupted viewing experience.

The MI TV 4K has some great hardware for its price. It has dual 10W speakers at the bottom for a stereo soundscape. On the port’s side, it has 2 x USB 2.0 ports, 1 AV port,1 S/PDIF, 1 RF port, 3 x HDMI ports with one of them supporting ARC, 1 LAN port, 1 3.5mm out. It also supports dual-band  WIFI and Bluetooth. It comes with a plastic Bluetooth remote which is fairly basic with no number pad and has hotkeys for Netflix and Amazon Prime Videos.

The Kodak CA smart TV has a 30W bottom-firing speaker for an immersive audio experience. The back panel is populated with 2 x USB ports, 3 x HDMI ports with one of them supporting ARC, 1 LAN port, and a 3.5 mm audio out port. It also dual-band WIFI and Bluetooth. The remote is more functional than MI’s with a number pad, channel control and hotkeys for not only Netflix and Amazon Prime videos but also YouTube and Google Play 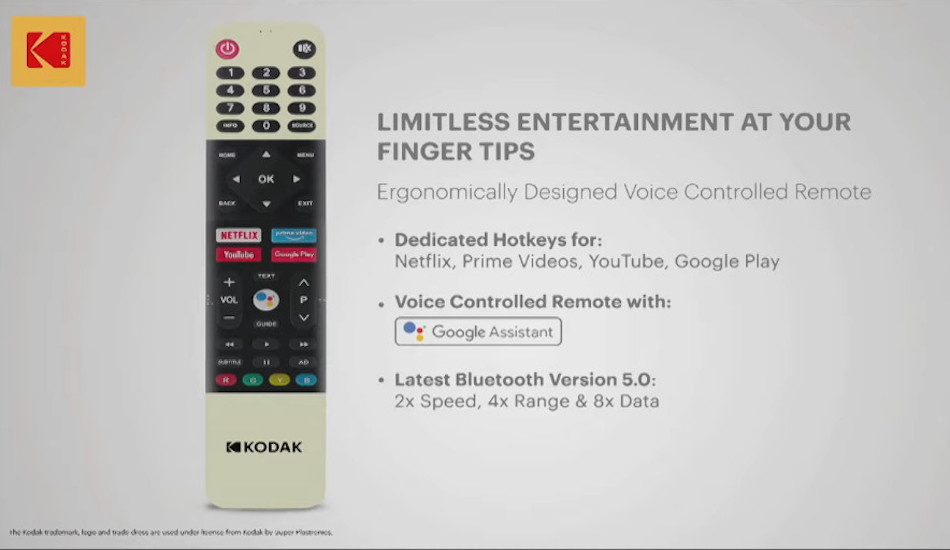 Winner: Kodak CA- A more powerful audio system leads to a better viewing experience and the included remote is better with more functionality and control.

The Kodak CA runs on Android TV OS out of the box and is based on Android 9 pie. It is powered by a Quad-Core Cortex A53 Mediatek Chipset along with a Mali-450 Dual-core GPU and 1.75 GB of RAM and 8GB of Storage. The OS offers you various apps from the included app store. The TV has Chromecast and Google Assistant built-in so you can control your smart home devices and your TV with your voice.

The MiTV 4X runs on the company’s proprietary Pathwall OS which has the ability to integrate all your smart features along with your apps. You can see the shows of your set-top box and your smart apps from a single page without the need for switching between inputs. The overall feel is not very smooth with limited functionality and apps. The app store is very limited compared to Android’s play store present on Kodak. The TV has Chromecast and Google Assistant built-in so you can control your smart home devices and your TV with your voice.It is powered by the Amlogic Cortex A53 along with the Mali-450 GPU. It has 2 GB RAM and 8GB storage. 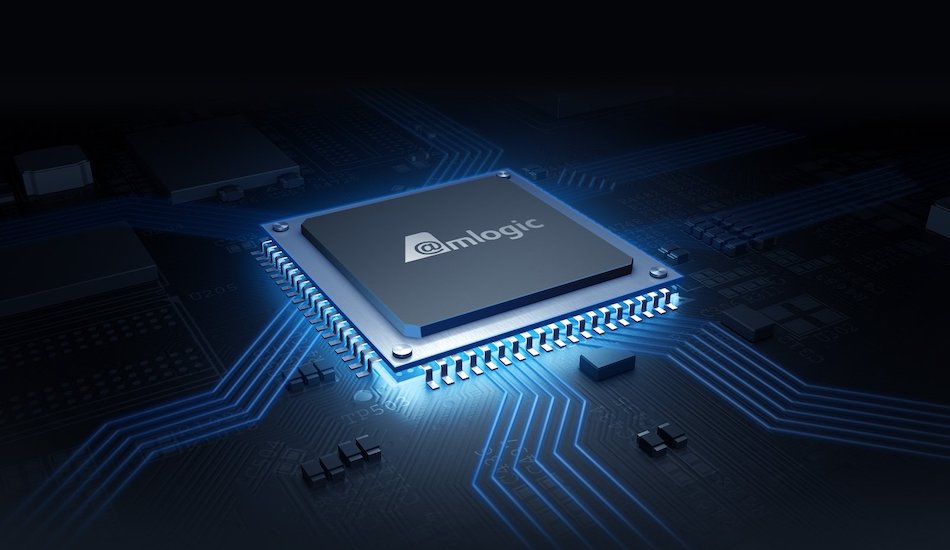 Winner: Tie- The Kodak CA has a better OS but the MI TV 4X has a higher RAM capacity.

The Mi TV 4X has a 4K resolution (3840 x 2160) and can play HDR10 and HLG content as well. HDR will ensure your images have the brightest colour without compromising the highlights. The TV supports Audio codecs like DTS-HD and Dolby Audio+.

The Kodak CA not only has a 4K resolution but also supports Dolby Vision along with HDR10 and HLG. Dolby Vision is Dolby’s proprietary technology that combines High Dynamic Range(HDR) along with a wide colour gamut to give you the best possible picture. The TV supports surround sound audio codecs like Dolby Digital Plus and DTS TruSurround. 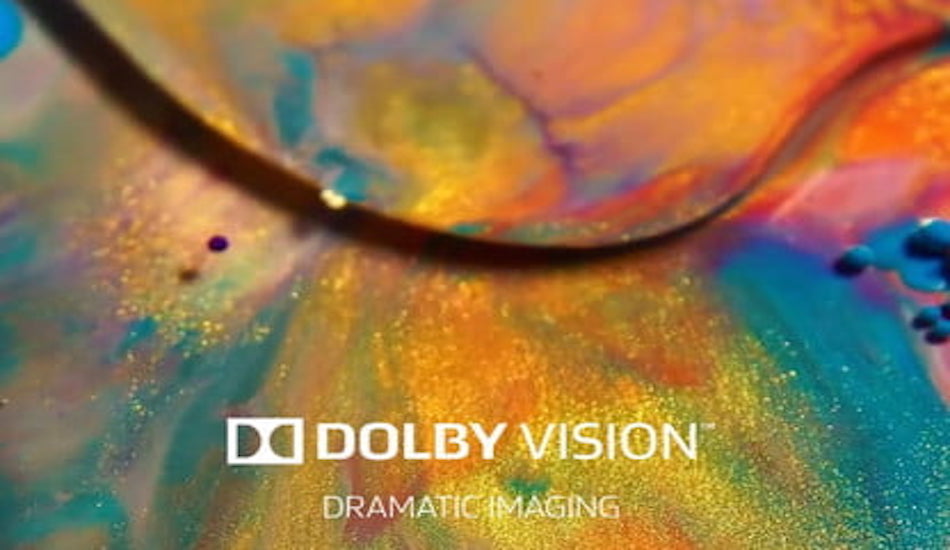 Winner: The Kodak CA wins this round with better Video and Audio performance.

The Kodak CA is clearly the better out of the two with better picture and sound quality which is complicated by a healthy OS and a functional remote and is an INR 1000 cheaper than the MI TV 4X. Both the TVs are available on Flipkart with the Kodak going on sale on 19th March.