Vodafone Idea, Bharti Airtel and Reliance Jio Infocomm have raised prices of their prepaid voice and data services. The increases in most plans announced by the three operators are in the range of 15-47%.

Vodafone Idea Ltd, Bharti Airtel Ltd and Reliance Jio Infocomm Ltd, said they will raise prices of their prepaid voice and data services. The increases in most plans announced by the three operators on Sunday evening are in the range of 15-47%. While the new tariffs for Vodafone Idea and Bharti Airtel will be effective starting Tuesday, Reliance Jio’s revised tariffs will come into effect on 6 December.

“Vodafone Idea Limited (VIL), India’s leading telecom service provider, today announced new tariffs/plans for its prepaid products and services. New plans will be available across India starting 00:00 hours of 3 December 2019,” the company said in a statement. The company has announced new plans in “unlimited”category with 2 days, 28 days, 84 days, 365 days validity which on the back of the envelope calculations show are costlier by up to 41.2 percent.

Vodafone Idea has only revised rates of plan that have unlimited mobile and data services and also introduced some new plans. The starting plan with data offering of 1.5 Gb per day with 84 days validity in “unlimited” category will cost around 31 per cent more at Rs 599 compared to Rs 458 at present. The company will raise the price of Rs 199 unlimited plan, which offers 1.5 Gb data per day, by about 25 percent to Rs 249. Vodafone Idea which is reeling under massive debt of around Rs 1.17 lakh crore had earlier cited acute financial stress on the company behind the decision to raise mobile call and data charges. 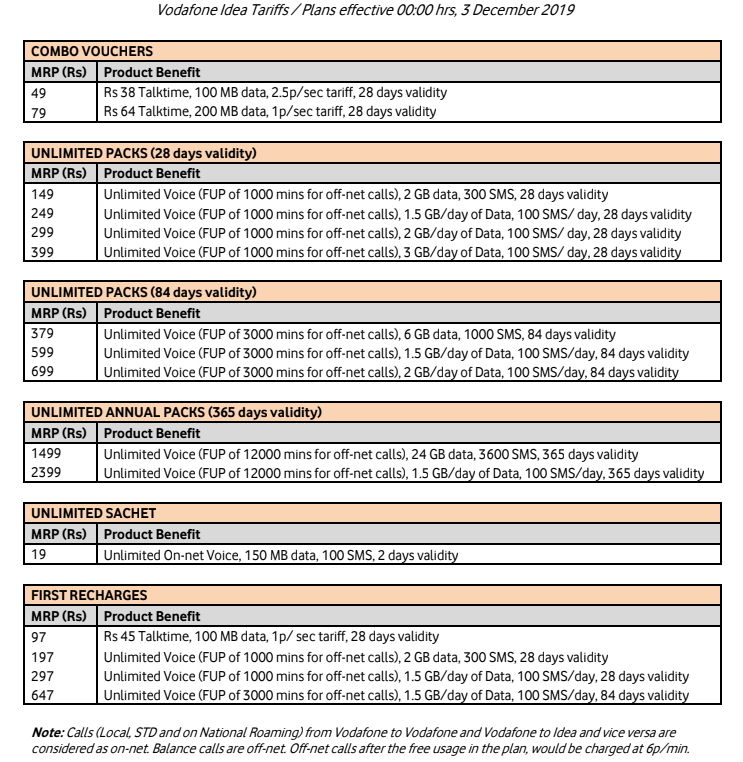 Meanwhile, Bharti Airtel announced new plans under which call and data charges will be dearer for its pre-paid customers by up to 42 percent from 3 December. “Airtel’s new plans, represent tariff increases in the range of a mere 50 paise per day to Rs 2.85 per day and offer generous data and calling benefits. These tariffs will be applicable from Tuesday, December 3, 2019,” the company said in a statement. It has announced new plans in “unlimited” category with 2 days, 28 days, 84 days, 365 days validity.

The company will raise the price of Rs 199 unlimited plan, which offers 1.5 Gb data per day, by about 25 percent to Rs 248. The move from both the companies follows the Supreme Court judgement on adjusted gross revenue. Bharti Airtel has posted a staggering Rs 23,045 crore net loss for the second quarter ending 30 September, due to provisioning of Rs 28,450 crore in the aftermath of the SC ruling on statutory dues. 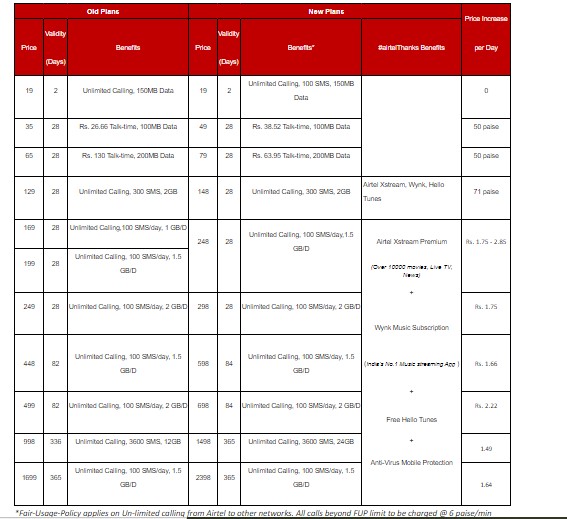 Jio on Sunday said it will launch new unlimited plans from 6 December, which will raise its voice and data tariff by up to 40 percent. “Jio will be introducing new all-in-one plans with unlimited voice and data. These plans will have a fair usage policy for calls to other mobile networks. The new plans will be effective from 6th December 2019,” the company said in a statement.