Infinix Hot 12 will launch soon in India. Infinix has confirmed that the phone will come packed with 6000mAh battery. 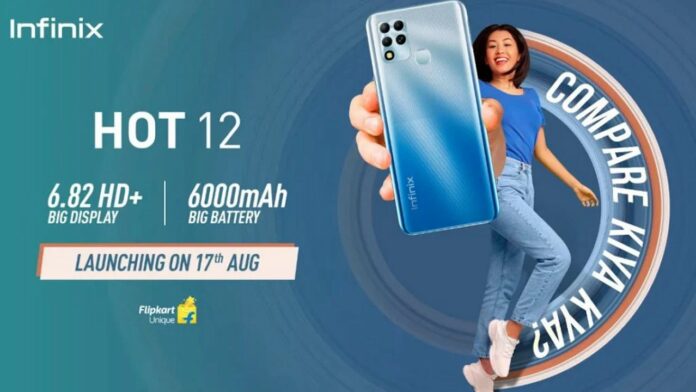 Infinix has confirmed to launch the Hot 12 smartphone in India on August 17. The device will be the third one in the Hot 12 series after the Pro and Play variants.

Infinix has teased the smartphone in a YouTube video. As per the video, the Infinix Hot 12 will come in four colours – 7degree Purple, Turquoise Cyan, Exploratory Blue, and Polar Black. The phone will be sold on Flipkart, similar to other Infinix models.

The Infinix Hot 12 has been confirmed to feature a 6.82-inch HD+ 90Hz screen. the display will come with 90Hz refresh rate, 180Hz touch sampling rate and 480 nits brightness. It will pack a 6000mAh battery with support for 18W fast charging via a USB-C port. There will be a rear-mounted fingerprint scanner as well.

In addition, Infinix has also confirmed that the phone will sport a 50MP rear camera with f/1.6 aperture, along with two more cameras and a quad-LED flash. Other details for the software, processor, front camera and others are still unknown.

For photos and videos, the phone comes with a dual rear camera setup. It has a 50-megapixel primary sensor with an f/1.6 aperture. The main sensor is coupled with a depth sensor and a quad LED flash. For selfies and video calls, the device uses an 8-megapixel shooter with f/2.0 aperture and a dedicated single LED flash.