India is without doubt the fastest growing telecom market in the world, but it had only 304 million subscribers at the end of May this year, according to a report by a market research firm. TRAI, on the other hand, had reported 621.28 million mobile subscribers at the end of March this year.
A research report titled India Mobile 2010, by market research group Juxt said, “While Juxt survey measures and reports both the mobile users (subscribers) and mobile connections (subscriptions, ie who take new connections), TRAI data reports only the mobile connections, (which it mistakenly calls ‘subscribers’).” 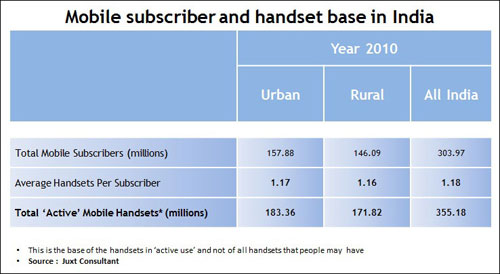 The report further says that, “In Juxt data there is a direct linkage between ‘number of active subscribers’, ‘number of active subscriptions’ and ‘number of active SIMs per subscriber’. Unless the same linkages are available as clearly and as comprehensively in TRAI data, a direct comparison is neither advisable nor appropriate”.
Mrutyunjay Mishra, director, Juxt, said, “We have measured only those mobile connections (SIMs) which are actively in use at the time of the survey, not counting the passive SIMs that may still be lying with subscribers – un-surrendered, but not being used actively.”
Interestingly, TRAI does not distinguish between active and passive SIMs. It reports all un-surrendered mobile connections (SIMs) in circulation as reported by the mobile operators, which may be actively in use or lying passive (in use occasionally, rarely, or not in use at all).”
According to analysts, the tremendous growth that the country has registered over the past few years can be attributed to improvement in telecom infrastructure and lately, to the adoption of multiple connections per user.
But the catch is that if regulators introduce a new regulation limiting the number of SIM cards per user (thus strengthening the verification process), and asking all operators to remove inactive SIM cards from their subscriber base, to report active subscribers, such as has been done in Vietnam and Pakistan, we would see operators’ subscriber bases shrinking dramatically.
Apart from that, while TRAI data indicates a 75:25 split in urban and rural mobile connections, the split at both the subscriber level and the active connection level as found in the Juxt report is closer to 50:50. The report says that the mobile subscriber base in rural and urban India is 146 million and 158 million, respectively.
If we look at the Indian population split, which is 70 per cent rural and 30 per cent urban, the marketing of any product for the masses, such as the mobile phone (with the pivot of its usage centred among the middle and lower middle class), which currently is heavily loaded in favour of urban India, is bound to drift towards the hinterlands eventually.
Also, according to the Planning Commission, 27.5 per cent of the population was living below the poverty line in 2004–2005, which means that only around 70 per cent of the Indian population can be the target subscribers.
Mishra said, “In our findings, urban-rural split of subscribers and subscriptions is reported from a physical location of households at the town and village level, and the list of towns and villages are taken from census listing.”
He added, “There is little clarity on how the urban-rural split is recorded and reported by operators, and TRAI, and whether all SIMs in use in rural areas are recorded as rural, as many such connections may actually be getting bought in the urban areas.”
He further added that what is also important to understand about rural usage of mobile phones in India is that the majority of rural mobile users and connections originate in villages that have large populations (greater than 2,000), which also show a high propensity to have multiple SIMs.
Further adding, he said, three-fourths of all existing rural mobile subscribers stay within 10 km from the nearest town – indicating a fairly concentrated penetration of mobile users in rural areas.
Regarding mobile handsets, the report says that there are 355 million active mobile handsets in India, and that mobile handsets that are in the price range of Rs 1,500 to Rs 3,000 are the ones which have seen the maximum sales.
Also, urban users show an inclination for handsets that cost more than Rs 3,000, while the rural population prefers handsets costing below Rs 1,500.
The Juxt research is based on a land survey of about 2.6 lakh individuals spread across all the mainland states and union territories, covering all the 23 telecom circles of the country. The survey was conducted in April–May this year, among about 37,000 households in 100 cities, and close to 20,400 households in 1,040 villages.