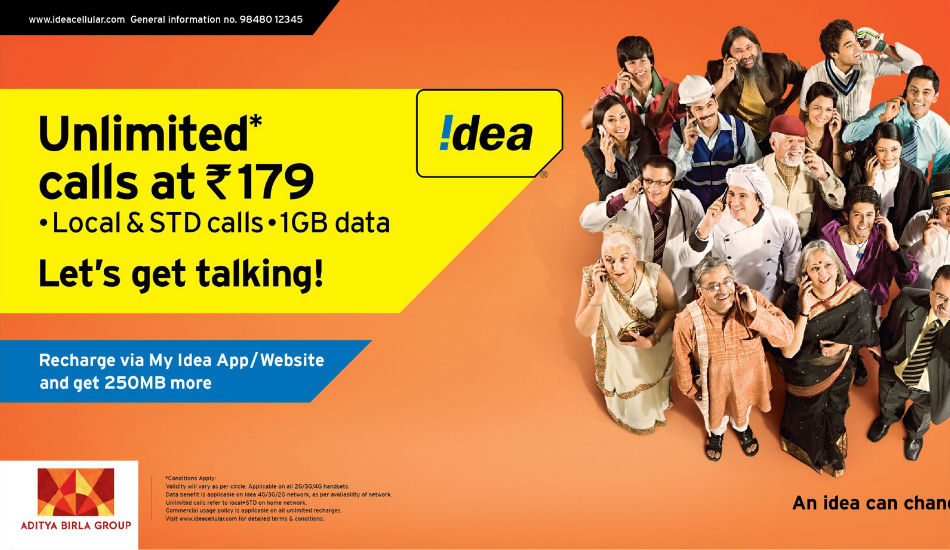 Users can avail this offer via company’s website or through the MyIdea app.

Idea Cellular has launched a new unlimited calling recharge for its prepaid users at Rs 179. Users can avail this offer via company’s website or through the MyIdea app.

Under this offer, users will get unlimited local and STD calls along with a validity of 21 days. Further, users will get 1GB of 3G data and the new recharge pack is available for prepaid customers using any type of handset, across the country.

Commenting on the launch, Sashi Shankar, Chief Marketing Officer, Idea Cellular, said, “In today’s world of absolute connectivity, a phone call from an old friend still brings a smile to our face, and this is the creative concept of the campaign. With our Rs. 179 recharge we will enable customers to continue their conversations non-stop.”

Previously, the company announced a new Rs 357 plan for its prepaid users. Under this plan, users will get 1GB data per day and it comes with a validity of 28 days, thus making a grand total of 28GB of 4G/3G data.

Additionally, users will get unlimited local and STD voice calls along with free roaming and 100 SMSes with the pack. The plan is in contrast with Jio’s Rs 399 plan, which offers 1GB of data per day, unlimited voice calls, free roaming with a validity of 70 days.

Share
Facebook
Twitter
WhatsApp
ReddIt
Previous articleXiaomi Mi Mix 2 to go on sale today at 12 noon
Next articleSmog: Here are two applications that you should use if you are in Delhi NCR
RELATED STORIES