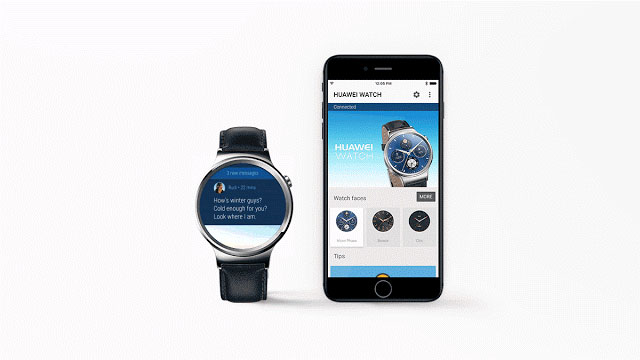 It seems that the year 2017 might prove to be a pivotal point for Android Wear as Google has recently rolled out the final developer preview for Android Wear 2.0. Though LG is reported to come up with two smartwatches that will be powered by the latest operating system, it seems that Huawei is not far behind. The company is reported to be working on the next-generation of its smartwatch, the Huawei Watch 2.

As reported by VentureBeat, the Chinese company is expected to unveil its second generation of its smartwatch at the Mobile World Congress, which will be held in Barcelona. The report further adds that the upcoming wearable device is said to come with a “sportier” look than the original and will run on the latest Android Wear 2.0. The Watch 2 will come with different variants with one sporting a cellular connectivity option. This means that the watch will remain connected to the internet with the help of a built-in e-SIM card when it is not connected to a Wi-Fi network or paired to a smartphone. The smartwatch is also reported to come with the ability to make and receive phone calls.

In related news, Google has announced the final developer preview for Android Wear 2.0 just before the official launch in early February. The latest build brings a host of new features including iOS support and number of bug fixes and enhancements.

With the latest preview developers will now be able to pair Android Wear smartwatches with iPhones and will be able to distribute their apps to iPhone-paired watches as well. Further, Android Wear apps running on watches paired with iOS devices will be able to perform phone hand-off flows for launching a web page on that device.

The final developer preview also adds numbers of enhancement and bug fixes. One of them is an improved Navigation Drawer, which will allow users to flip a flag to toggle to single-page, icon-only action drawer, which provides faster, more streamlined navigation to different views in the app.

Google is reported to launch the latest update during a special event on February 9. The company is also tipped to launch two new smartwatches made by LG during the event. Dubbed as LG Watch Sport and LG Watch Style, the wearables are touted to come with some top-of-the-line specs and premium design.

Lastly, coming to the Android Wear 2.0, the new smartwatch OS will bring in a bunch of new features including on-device Play Store that will allow users to download watch-specific apps, support for Android Pay, support for Google’s AI Voice Assistant, revamped notification centre and more. Moreover, not all current Android Wear smartwatches will be updated but most of the recent ones like Moto 360 Gen 2, LG Watch Urbane and 2nd Edition LTE, ASUS ZenWatch 2, ASUS ZenWatch 3, Huawei Watch, Fossil Q Wander etc. will be updated to Android Wear 2.0 platform.