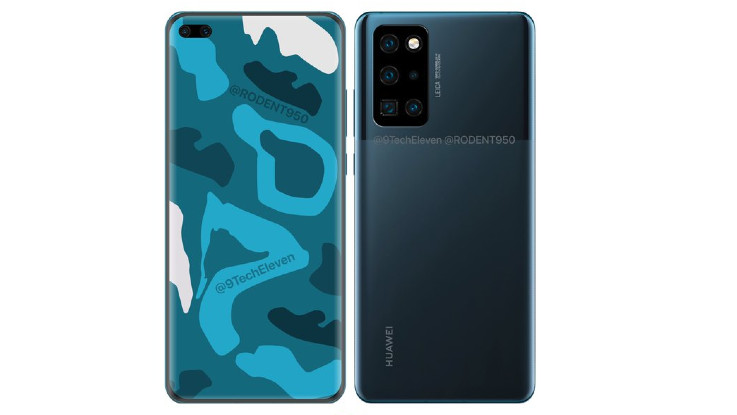 The front panel of the Huawei P40 Pro reveals dual-punch hole design with minimal bezels around the corners.

The render of the Huawei P40 Pro was posted by a tipster @Rodent950 and it shows the front and back panel of the device. The render reveals that the smartphone will come loaded with a dual-glass design, similar to what we have seen in Google Pixel 3 lineup. The first half of the back panel comes with a glossy finish, while the second half comes with a matte finish. It shows that the phone will come with Blue colour option.

The render also reveals that it will come loaded with penta-camera setup with three cameras stacked vertically in one row, while the second row features an LED flash and two camera modules. One can also see Leica branding. The front panel of the Huawei P40 Pro reveals dual-punch hole design with minimal bezels around the corners. The right side comes with volume controls and power on/off button.

On the camera front, the Huawei P40 will feature a 40-megapixel primary lens along with a 20-megapixel ultra-wide angle lens, an 8-megapixel periscope lens and a Time of Flight (ToF) sensor. The tipster further claims that the phone will be loaded with a 32-megapixel selfie shooter with 3mm hole. On the battery front, the Huawei P40 will come with 40W SuperCharge fast charging support and 27W wireless SuperCharge fast charging support.

It was earlier reported that Huawei P40 will be backed by a 6.5-inch Full HD+ OLED display with 120Hz refresh rate and 98 per cent screen-to-body ratio. It will come with a combination of 64-megapixel Sony IMX686 sensor with OIS support, a 20-megapixel ultra-wide-angle lens, 12-megapixel periscope lens, a macro sensor and a Time of Flight (ToF) sensor. The Huawei P40 will come loaded with a new graphene-based battery with a capacity of 5500mAh. The company might also introduce 50W flash charge.