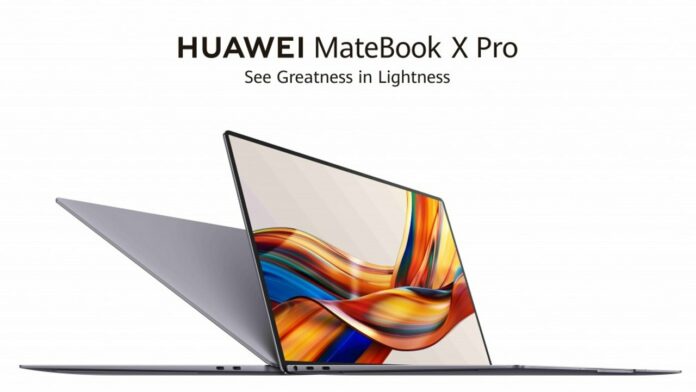 Huawei at its MWC 2022 event has unveiled the two new Windows 11 laptops – the Matebook X Pro 2022 and Matebook E. The former is the new flagship ultraportable laptop while the Matebook E is a compact 2-in-1 model running full Windows 11.

The MateBook X Pro is equipped with the Intel Core i5-1155G7 and i7-1195G7 processors with 16GB RAM and 512GB/1TB storage options. The new dual Shark Fin fan cooling system improves heat dissipation efficiency and double its performance. It has a fingerprint scanner on power button.

The newest MateBook X Pro features a set of six speakers and four microphones with AI noise-cancellation technology. The device comes with a 60Wh battery and Windows 11 Home.

The Matebook E features a 12.6-inch OLED with with 2560 x 1600 pixel resolution with 16:10 aspect ratio and 90% screen to body ratio. It is a Windows 11 tablet that converts to a laptop via its bundled keyboard case.

The tablet is powered by Intel’s 11-gen core i5 and i7 chipsets with Iris XE graphics. It has 8/16GB LPDDR4x RAM and 256/512GB PCIe NVMe SSDs. This one comes with four speakers and four microphones.

This device is equipped with an 8-megapixel front-facing camera and a 13-megapixel rear camera. It also packs a 42 Wh battery which charges at 65W via the bundled charger.

It has a three speaker setup and a built-in fingerprint. The ports include two USB-C ports, two USB-A connectors and a headphone jack.

MatePad Paper features 10.3-inch E Ink display. It supports 32 levels of brightness which lets you read in darker environments without any issues.

The tablet runs HarmonyOS 2.0. It packs a Hexa-core processor paired with 4GB of RAM and 64GB of internal storage. There is a 3625mAh battery that is claimed to offer up to 28 days of battery life on standby. The device also features a fingerprint sensor integrated in the power button. The tablet weighs 360 grams.