HTC confirms Android 9 Pie rollout to four of its devices 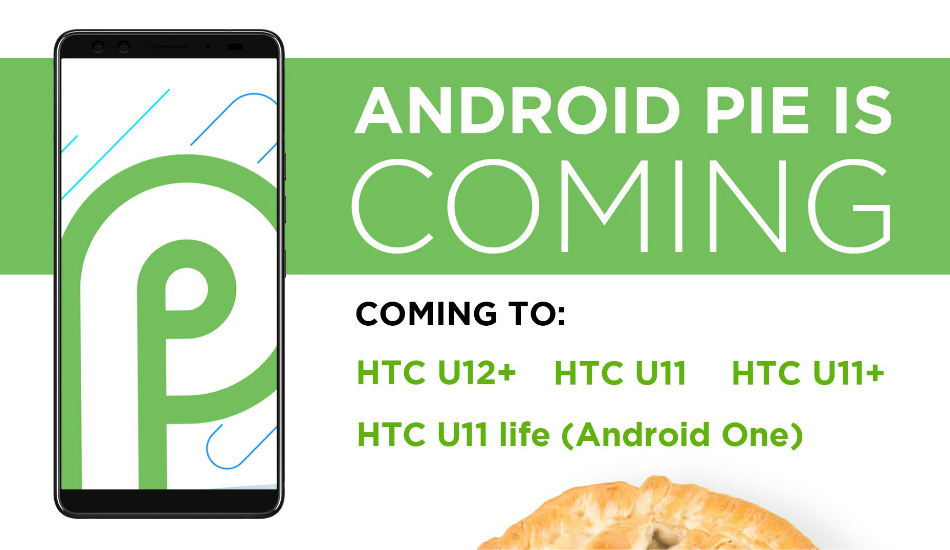 HTC through its official Twitter handle revealed that it will soon start seeding the Android Pie update to four of its smartphones - HTC U12+, U11+, U11 and U11 Life, the last of which comes under Google Android One initiative. There's no word on the rollout timeline or whether the update will land on other devices.

Last week, Google officially named its next mobile interface as Android 9 Pie with a refined UI, gesture navigation, AI features and enhanced security and announced that the new update will be instantly rolled out to 12 devices from its own range of smartphone as well as other OEMs. Taiwanese manufacturer HTC now wants to join in on the fun as they’ve now announced that an update to Android 9 Pie will also be rolled out to their devices in the near future.

HTC through its official Twitter handle revealed that it will soon start seeding the Android Pie update to four of its smartphones – HTC U12+, U11+, U11 and U11 Life, the last of which comes under Google Android One initiative. No further information about the update landing on other devices or the timeline of these updates were revealed and HTC said: “timeframes for roll-out will be announced in due course”.

While users of these four smartphones have got something to rejoice for, it’s surprising to see that HTC hasn’t included the HTC Desire 12+ on the list which was unveiled only a few months ago. The same can be said about the HTC U Ultra and U Play since both of these devices come under the company’s two-year software protection plan and neither of them is included in the rollout list.

Besides HTC, Vivo has also confirmed rollout of Android 9 Pie before the year-end which we expect to pop up first either on the Vivo X21 or NEX device. Sony has also not kept quiet about the rollout and has already announced the update will be seeded to six of its devices when a stable build is ready. Other OEMs like HMD, OnePlus and Oppo have also been preparing their versions of the Android P update, which is currently on beta for a handful of their devices.