Android 9.0 Pie: What’s new and how it compares to Android Oreo? 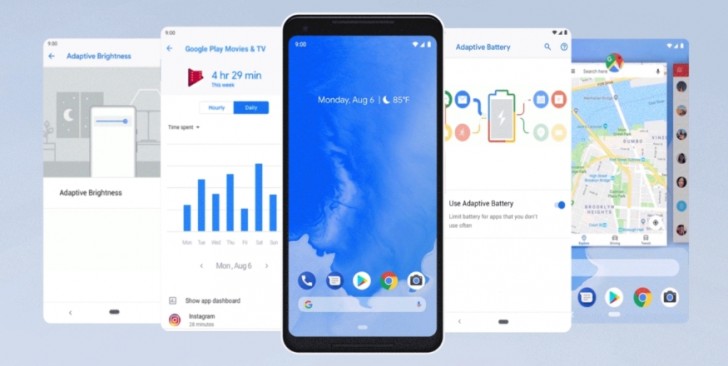 The latest Android version will be known as Android Pie and it focuses on simplicity, intelligence and adds a slew of new features. With Android P, Google has introduced a new system of navigation. The latest version is all about gestures to enable navigation right from the home screen.

Google has finally unveiled its next-generation of the Android operating system, the Android P. And just like previous dessert-themed naming convention from Google, the P here stands for Pie.

The latest Android version is rolling out today to Google’s Pixel lineup and Essential Phone. Other Android smartphones which were part of beta testing will get the update coupled with Android One phones by the end of this year. But, the question here is: what has changed? Does the new Android version has better functionality as compared to previous Android 8.0 Oreo? Or not? Here we try to answer some them. 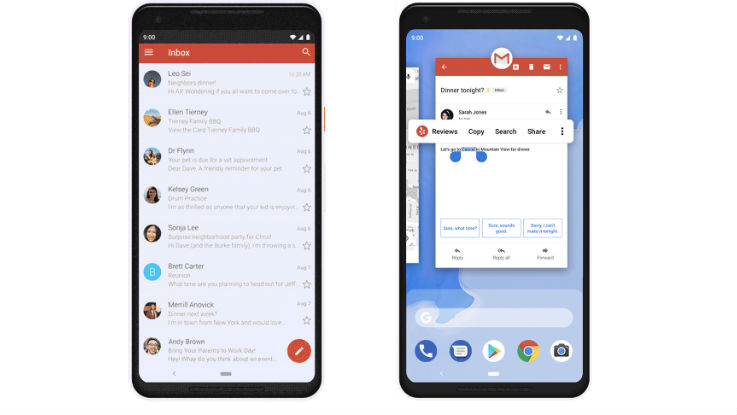 The most noticeable aspect of the latest Android 9.0 Pie are the visual changes. The company has introduced a host of new features, styling and changes that make it look more immersive as compared to older Android Oreo.

Google has finally removed the three navigation buttons that were present at the bottom of every Android smartphone with a new pill-shaped icon. Users can navigate through the following gestures with the new Android P:

The company has completely changed the way we have been navigating and it has introduced some features as well. So, for examples, the recent menu now shows full app and one can also select, copy and paste text right from this mode.

Other interesting visual changes come in the form of new notification panel and Quick settings menu. Starting with the Quick Settings menu, you get:

This looks much more refined and immersive as compared to Android 8.0 Oreo. Coming to notification panel, you get some smarter improvements:

With Android P, Google has completely changed the placement of volume controls on Android. You get the volume controls slider at the side of the screen. This is not it. There are three different modes right beneath it showing ring, vibrate or Mute options.

Just like volume controls, you will now get power off, restart option aligned vertically at the side of the screen.

Gone are the days when you have to use different key combinations to take a screenshot. With Android P, Google has added screenshot option whenever you long-press power on/off button. The new option will be available right beneath power off and restart option. 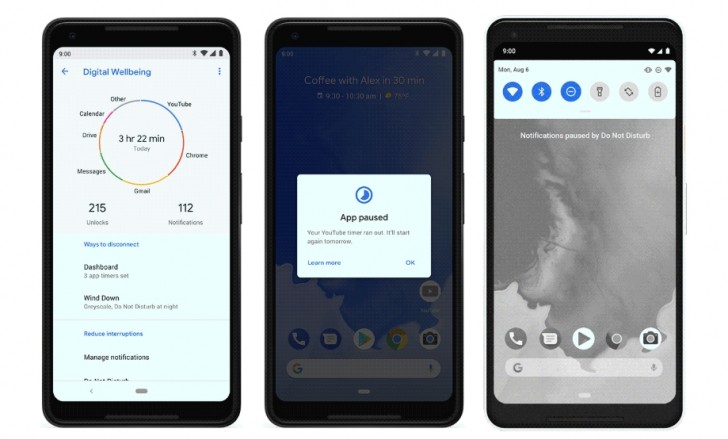 With the latest Android version, Google is focusing more on wellness, which it calls “Digital Wellbeing”. The company has introduced a new dashboard that shows the following:

The feature is in currently in beta testing phase and it is expected to be made live for the masses in the near future.

Another feature Google introduced is App Timers. This feature basically allows you to set a time allowance for specific apps. So, whenever you reach the set time limit, the app will be greyed out. This is an interesting way to curb those ‘one last round’ of games, though you still need some willpower to stop yourself.

New Do Not Disturb And Wind Down

The company has introduced a new DND mode with Android P. With this, users can enter the Do Not Disturb mode by simply placing the phone over the table. On the other hand, Wind Down does the following: 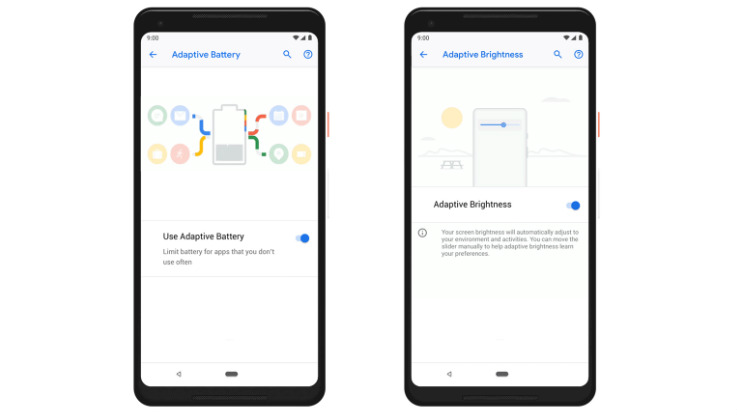 Another new feature is the Adaptive Battery. The feature uses AI to prioritizes battery consumptions for those apps, which you use frequently. This is an upgrade to the Battery Saver option available in Android Oreo. The feature basically:

This will thus help the phone to manage the battery more effectively. Coming to Adaptive Brightness feature, it uses machine learning to automatically adjust the brightness of the display as per the ambient light present. This is an upgrade to the Auto Brightness settings found in Android Oreo.

App Actions is yet another feature, which is new to Android users and it has included in Android 9.0 Pie. through this feature, users will get a more personalised experience and:

Moving on, the Slice is a part of App Actions and it shows templates of certain apps right from within the Google Search app and Google Assistant.

Another feature of the Android 9.0 P is the support for notch display. The new Android P now support for devices that come with notched display and it also supports 18:9 and taller aspect ratios.

Google claims that the latest Android P comes with some added security, which is not present in the previous Oreo version. To start with, the company has claimed that background apps will not have microphone and camera access. This will surely protect users’ privacy.

Further, the OS will inform users when a background app is using a microphone or camera via a notification. Another feature in the Android P is the alert tone for call recording.

Google will notify the users by an alert tone every fifteen seconds so that users can be aware of the fact that their calls are being recorded. Moving on, Android backups will be protected with PIN, pattern or password for added security.

To conclude, the Android 9.0 P does come loaded with some nifty features. The addition of well-being features will surely help users in accepting a healthy lifestyle. There are noticeable visual changes that makes it a much more immersive experience as compared to Android 8.0 Oreo. However, the major challenge here will be the rollout at mass scale. The Android Oreo, which was launched last year, is yet to reach the masses across the globe. So, it should be interesting to see whether the newest Android version will face the same fate of slow roll out or not.