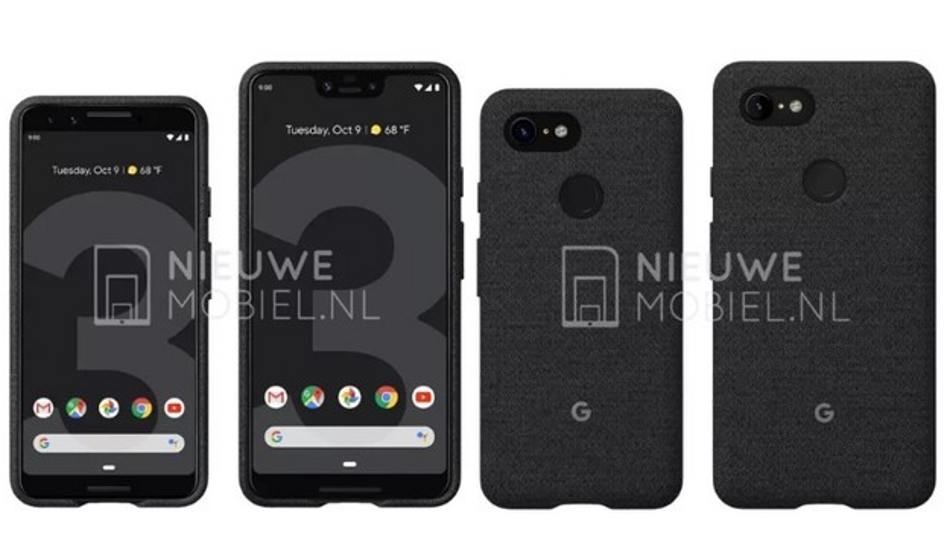 The Google Pixel 3 and 3 XL will be launched at Google’s annual “Made by Google” event on October 9th in New York City.

The photos via a Dutch publication, nieuwemobiel.nl show the Google Pixel 3 and 3 XL case renders. The leaked renders show both the smartphones from both the front and back side suggesting that the company will offer fabric cases, which are similar to the one launched with last year’s Pixel 2 series.

The front panel basically shows the difference in the sizes of the Pixel 3 and Pixel 3 XL. The bigger Pixel 3 XL will sport a notched display and the smaller Pixel 3 will come with regular 18:9 display. Seems like the company will unveil new Pixel Launcher design also as there is the Google search bar at the bottom. The render shows a shortcut to Google Assistant on the right side. The dual selfie camera setup is also seen in the front panel of both devices.

The rear side of both the Pixel 3 devices shows a single rear camera which is present on the top left side with an LED flash. We can also see a fingerprint scanner in the center at the back. There is also Google’s “G” logo on the case which reveals that these are official cases from Google itself.

As perearlier reports, the Google Pixel 3 XL will feature 6.2-inch (1440 x 2960) 19:9 aspect ratio display with a notch. The phone will be powered by Qualcomm Snapdragon 845 processor and a 630 GPU Adreno and it will have a single 12-megapixel rear camera and dual 8MP front cameras. The phone will reportedly come with 4GB RAM and 64GB internal storage and will run on the Android 9.0 Pie. It will have a 3,430mAh battery with wireless charging support and will run stock Android 9.0 Pie out-of-the-box.

Meanwhile, the Google Pixel 3 and Pixel 3 XL are expected to come in mint and Pink colour options. Stay tuned with us for more updates on this as the phones are going to be-be unveiled next month.