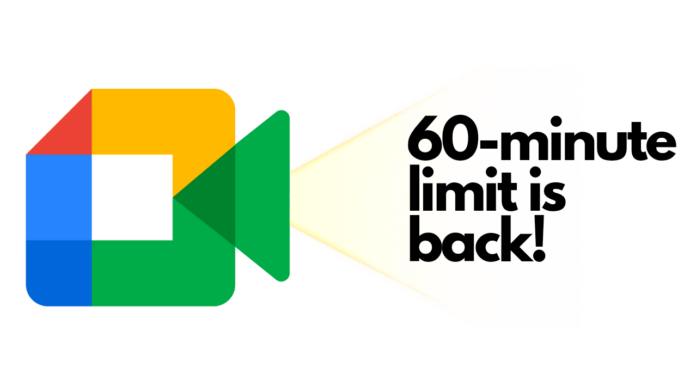 Google Meet has been an essential element for businesses since the pandemic began. The video calling service provided unlimited group calls for free accounts, but that’s now changing. Google had previously said that it would be bringing a 60-minute limit for its calls on Google Meet. The new guidelines have now come into effect.

As posted on Google’s own help page, users that will host a group video call with more than two participants will have a 60-minute limit on their call. “At 55 minutes, everyone gets a notification that the call is about to end. To extend the call, the host can upgrade their Google account. Otherwise, the call will end at 60 minutes,” Google’s page reads.

The new guidelines will only affect group calls, while one-on-one calls still have a limit of 24 hours. Now, if someone wants to host a group video call with a free account, they will have to create a new link after the end of 60 minutes.

Google Meet was first made available to all users back in 2020. Before that, the service was available only to Enterprise or Education customers. The 60-minute limit for Google Meet has been delayed multiple times in the past due to the Coronavirus situation.

Google announced in April 2020 that it would limit meeting times to 60 minutes from September 2020. The timeline was then extended till March 2021. And finally, the limit was again extended till June 30, which has now seemingly come to an end. Back in February, Google released new ChromeOS updates for Google Meet that helped students be on video calls at home while running apps such as Google Classroom, Docs, Sheets, Slides and other tools.

The company had also made improvements to the Chromebook camera and video feed performance. This was done to improve processing in audio and video data.