E-bike catching fire: Why does it happen, list of some incidents

An e-bike may catch fire less often than a gasoline powered vehicle but when it does, it is equally harmful. 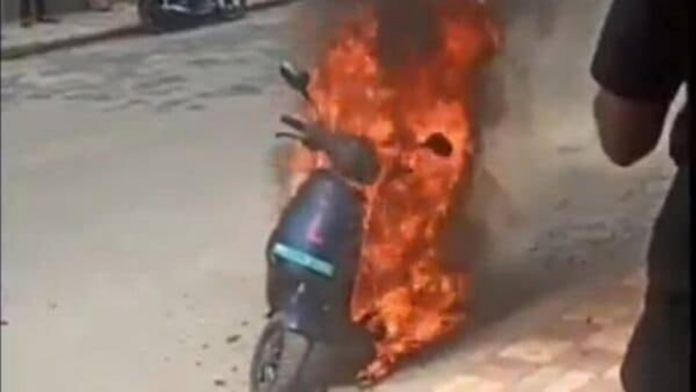 The future of the automotive industry seems to be all-electric. However, before everything goes electric, the technology still needs to adapt to the Indian region as it still poses a threat to the consumers, similar to how most of the other electrical things do. You might think that an E-Bike may be a safer option than a Gas powered vehicle but that’s not the case. While E-bikes may be easy on the pocket in a daily run, they may not be anymore safer than a Gas powered vehicle because these can catch fire as well. Before we tell you about some of the incidents involving fire and an E-bike, you should know why it happens.

Why an E-bike could catch fire?

A report from RISE Research Institutes of Sweden notes that “As the use of lithium-ion battery-powered road vehicles continues to increase around the world, their involvement in traffic accidents and fire incidents are likely to rise. This can damage the lithium-ion battery and subsequently pose a threat to occupants”.

The Thermal Runaway Phenomenon refers to the process where a battery’s cells reach a critical temperature that causes them to spontaneously combust. Most e-bikes have a battery that consists of a series of cells containing lithium ions. To use such batteries safely, the cells should be kept within a defined voltage and temperature window. Now, the cells inside may release gas when abused, which can ignite or cause an explosion.

A battery failure could occur due to a number of reasons including poor cell design or manufacturing flaws, external abuse (thermal, mechanical, electrical), or maybe even poor battery assembly design or manufacture. Some reputable E-bike manufacturers procure battery packs from reputable companies but some manufacturers which aim to keep the price of the product as low as possible, opt for a battery from an unknown supplier which might not get them a stable design.

The primary threats posed to the battery include external or internal short circuits, high or low temperatures, overcharge or over-discharge. As heat can be a major cause for battery explosions, batteries need to be developed using advanced technologies which can withstand high temperatures considering they can reach up to 46 degrees in some parts of the country. Apart from that, internal or external short circuits also destabilise the battery, resulting in an explosion.

The most recent incident involved an Ola S1 electric scooter that caught fire in Pune. While the cause of the fire is yet to be determined, fortunately, no one was harmed when the fire took place as the Scooter was stationary.

Talking about the incident, Jabbar Singh Purohit, an eyewitness said, “Our commercial shop is on the main road where this Ola bike was parked. Initially, the fumes stared coming out and all of sudden in few seconds it caught fire. There was a huge noise and no one was willing to step closer to the bike. We tried to look for its owner but no one came forward. Our society watchman tried to douse the fire, but no avail”.

Ola did release a statement on the incident via Twitter which read, ”We are aware of an incident in Pune that happened with one of our scooters and are investigating to understand the root cause and will share more updates in the next few days. We’re in constant touch with the customer who is absolutely safe. Vehicle safety is of paramount importance at Ola and we are committed to the highest quality standards in our products. We take this incident seriously and will take appropriate action and share more in the coming days”.

The tragic incident took place the same day as the Ola S1 incident, where it caused the deaths of a father and her daughter. The E-bike caught fire while it was charging and its smoke caused suffocation which led to the demise of the father and the daughter.

According to the Police report, M. Duraivarma who ran a photo studio bought a new e-bike and had plugged its charger into an old socket at the entrance of his house on Friday night. During the charging process, an electrical short circuit led to the e-bike catching fire.

Following that, the smoke spread through the residence. Suffocating on the smoke, Duraivarma and his 13-year-old daughter Mohana Preethi met their demise. It was stated that the socket might be an old one with less voltage capacity to charge an e-bike. The brand of the vehicle was not revealed.

The ePluto made by Pure EV was found in flames back in September of last year in Hyderabad. The incident was captured on camera which shows vehicle throw ashes and smoke into the air from beneath the seat, followed by intermittent bursts of fire.

Pure EV responded, ”As seen from the video, after a long smoke kind of event, the battery went into complete thermal runaway. Due to the effective thermal management system used in the battery and coupled with the blast-proof alloy metallic casing, the thermal runaway event (fire incident) was delayed by almost 10 minutes and completely avoided the explosion kind of event, unlike the 100s of EV Lithium Battery uncontrolled fire explosions that took place across world/India”.

“We are investigating the incident by recalling the damaged vehicle to the factory and we will know more details about the internal root causes to the triggering of thermal runaway event in the particular battery”, it added.

The X1 which is approximately priced at Rs 80,000 and has a 1.9 KWh lithium ion battery was in fumes in December of 2021. A video of the incident was shared online which showed the E-bike erupting plumes of smoke before it got engulfed in fire. “As we make vehicles only and do not make batteries in-house, batteries come from a third party vendor,” a spokesperson for Super Eco told ETAuto. “We have taken up this matter with the battery supplier and it is under scrutiny to identify the root cause”.

For those unaware, Okinawa is one of the top e-bike manufacturers in India. However, it fell victim to an incident where an E-scooter from the brand was seen in an explosion while it was parked inside a garage.

Okinawa’s founder and managing director Jitendra Sharma said the company would reach out to the customer and investigate the incident to see what went wrong. Jitendra Sharma told ETAuto, “We have come to know about this matter recently and we are trying to find out what went wrong and what could have been done to avoid such an incident. We believe that user awareness is essential in the case of electric vehicles, so that lack of user information or incorrect ‘code of conduct’ results in trust and does not completely give up on the idea of ​​switching to electric vehicles, which is a real problem. The need of the hour is environmental”.