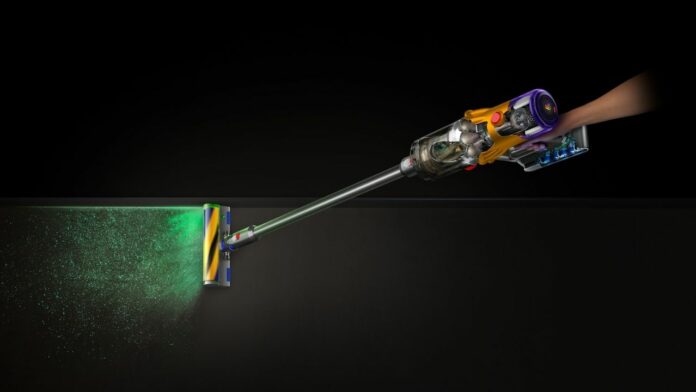 Dyson has unveiled its latest cord-free vacuum cleaner in India – the Dyson V12 Detect Slim for Rs 58,900. It uses adapted laser technology to reveal hidden dust, integrating a diode laser into the cleaner head that is positioned at a 1.5-degree angle, 7.3mm off the ground to create the contrast between dust and floor.

The company claims that Dyson V12 can detect hidden dust as small as 10 microns and is equipped with an acoustic piezo sensor to enable scientific proof of what’s been sucked up.

V12 ses a Dyson Hyperdymium motor that generates up to 150 air watts of suction and 5-stage filtration captures 99.99% of dust particles down to 0.3 microns.

Dyson claims to have engineered laser dust technology to ensure that your home has been deep cleaned. Laser Dust Detection reveals the particles you cannot see with the naked eye by integrating a precisely angled into the cleaner head.

Dyson engineers integrated a green laser diode – chosen for its ability to provide the best contrast.

An acoustic piezo sensor has been integrated into the vacuum. Carbon fibre filaments in the cleaner head pick up microscopic particles sized and counted up to 15,000 times a second. The dust enters the vacuum and hits the acoustic piezo sensor within the bin inlet with the tiny vibrations being converted to electrical signals. The dust size and quantity are shown on the in-built LCD screen, so the user can see how much dust the vacuum has removed and the different sizes of particles and deliver scientific proof of a deep clean.

Dyson has introduced a new anti-tangle Hair screw tool with V12. It is an anti-tangle conical brush bar that spirals hair off and into the bin. This prevents the wrapping of hair around the brush bar. It is designed for human and pet hair.