BoAt has launched a new set of limited edition audio products in partnership with Netflix. 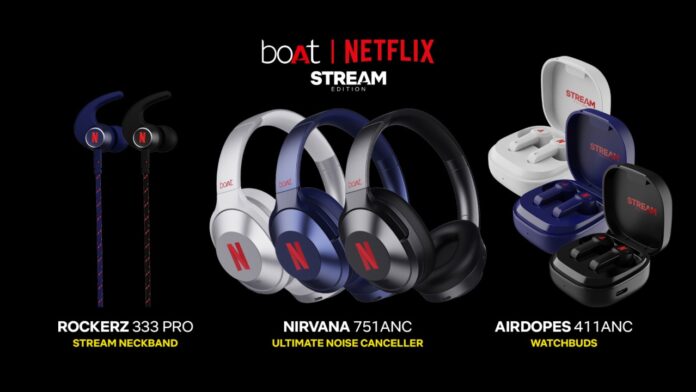 Netflix and boAt have announced that they have teamed up to elevate the streaming experience with the launch of the new limited edition noise cancelling range of True Wireless Earbuds (TWS), Headphones (On-Ear), and a Wireless Neckband. The streaming edition range will include boAt Nirvana 751 ANC, Airdopes 411 ANC, and Rockerz 333 Pro.

BoAt also notes that globally, this will be Netflix’s first-ever partnership in the audio category. The new audio products form BoAt are nothing different from their earlier counterparts, apart from the Netflix branding on each one of them.

The True Wireless earbuds come with 5.2 Bluetooth connectivity with a wireless range of 10 meters to connect to devices. The earbuds are compatible with iOS, Android, laptops, music player and other Bluetooth compatible devices.

Furthermore, the Boat Airdopes 411 offers up to 17.5 hours of battery life on a single charge. When Active Noise Cancellation (ANC) is turned on, the earbuds offer 4.5 hours playback and up to 5.5 hours when ANC is turned off. In addition, users can get 60 minutes of playback with just 10 minutes of charge. There is also a Type-C port for charging.

Moreover, the TWS earbuds is equipped with IWP (Insta Wake N’ Pair) Technology that powers on the earbuds and puts them into connection mode as soon as one opens the lid of the carry case.

Airdopes 411 ANC comes with active noise cancellation (ANC) up to 25dB. The earbuds also offer the Ambient Mode for transparency related to your audible surroundings even while you are listening to your playlists. Besides, the TWS also has one-touch Google Assistant and Siri support. Lastly, the earbuds support an IPX4 water resistance rating.

The boAt Nirvanaa 751 ANC headphones boasts up to 65 hours of playback without ANC and 54 hours with ANC. They have fast charging support where the company claims a 10 hour backup with 10 minutes of charge. The hybrid ANC in the new boAt headphone is capable of cancelling noise up to 33dB and there is a dedicated ANC button in the headphone.

You also get an ambient mode and the device is compatible with Bluetooth 5.0, and also has an AUX port for listening to audio. The audio relies on 40mm drivers. Further, you get a dedicated mic for calling along with a button using which you can instantly access the voice assistant of your choice. The headphones can be charged via USB-C.