BlackBerry BBG100-1 pops up on Geekbench with Snapdragon 625 SoC

With BlackBerry KEY2 scheduled for a launch next month, the device in question could well be the BlackBerry Ghost.

Days after the BlackBerry KEY2 cleared for WiFi and Bluetooth certification, there’s another BlackBerry device which has surfaced on benchmarking site Geekbench clearly indicating that the Canadian smartphones company will be releasing more than one smartphone in the near future.

Modelled as BBG100-1, the upcoming BlackBerry device appears to be powered by the MSM8953 chipset which we’ve come to know as the Snapdragon 625 processor. The device is coupled with 4GB of RAM and will run on the latest Android 8.1 Oreo. The listing indicates that the BBG100-1 scored a decent 700-mark in the single-core test while achieving a significant 3,656 points in multi-core performance.

BlackBerry recently confirmed the launch of its KEY2 smartphone that’s codenamed Athena scheduled for the latter part of June. Keeping that in mind, the BBG100-1 which has appeared online for the very first time is believed to be the BlackBerry Ghost. 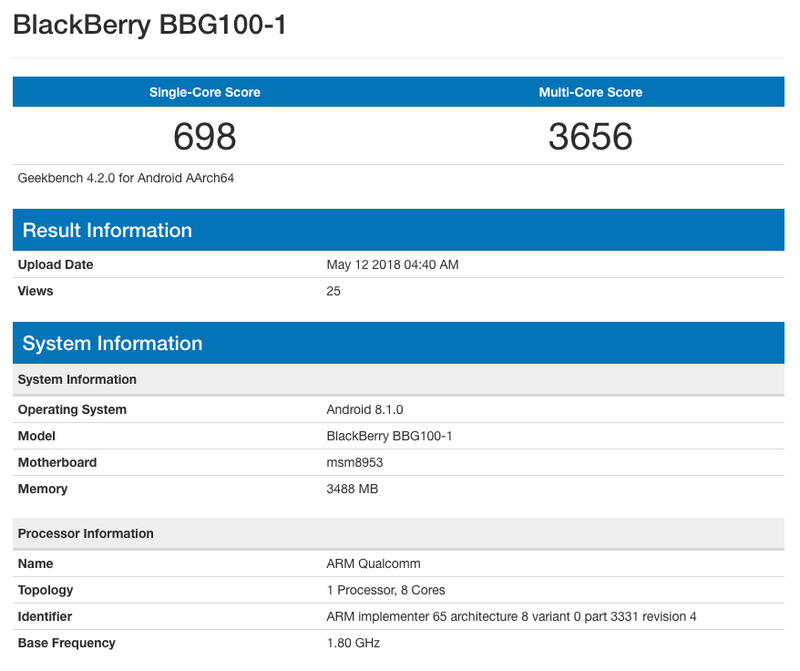 BlackBerry Ghost and its superior Ghost Pro is reported to be the first BlackBerry devices to be made under the company’s Indian licensee Optiemus Infracom. The Canadian mobile manufacturer had earlier entered into a licensing agreement with Optimus for the production of Android-based BlackBerry phones in India.

Though an official-looking render was shared a couple months ago, the Ghost was expected to come with a Snapdragon 660 processor with 6GB/8GB RAM options. Judging by what we have on the Geekbench listing here, the BlackBerry BBG100-1 could be a whole other device and thus we suggest you process all this information with a pinch of salt.

If there’s indeed the Ghost or Ghost Pro, we still have a long way to go and possibly wait till BlackBerry releases the KEY2 next month for anything to get official.