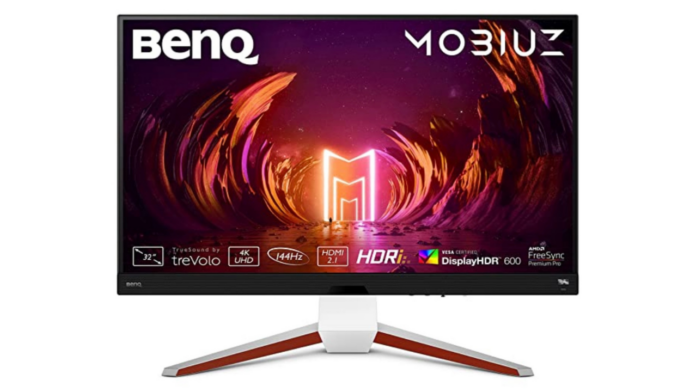 BenQ has launched a new gaming monitor in India for PC, Xbox Series X and the PlayStation 5. The new BenQ Mobiuz EX3210U 4K Gaming Monitor has a 32-inch 4K Ultra-HD display with up to a 144Hz refresh rate and 1ms response time. For audio, the gaming monitor comes with inbuilt 2.1 channel speakers including two 2W speakers and a 5W subwoofer.

The Benq Mobiuz EX3210U gaming monitor sports a 32-inch 4K Ultra-HD (3,840×2,160 pixels) IPS LCD display which has a 1ms response time with a 144Hz refresh rate support when connected to a computer, and 120Hz when connected to a gaming console such as the Xbox Series X, or a PS5. The monitor offers 98 percent DCI-P3 colour gamut coverage and is Vesa DisplayHDR 600 certified, according to the company.

The monitor comes with support for AMD FreeSync Premium Pro technology to reduce tearing, lag, and stuttering while gaming. It supports a maximum brightness of 600 nits and features Benq’s HDRi technology for contrast adjustment.

As for audio, it comes with dual 2W speakers and a 5W subwoofer. You get five audio presets for various gaming scenarios such as FPS, racing, and sports games. Other scenarios such as cinema and pop/ live music are also supported. Furthermore, it also supprots company’s Bongiovi DPS sound technology. Connectivity options include two HDMI 2.1 ports for current-gen consoles, a DisplayPort 1.4 port for PC gaming at 4K resolution, four USB 3.0 ports and a headphone jack.