Asus has expanded its ExpertBook series laptops with six new additions such as ExpertBook B3 Flip, B9, and more. 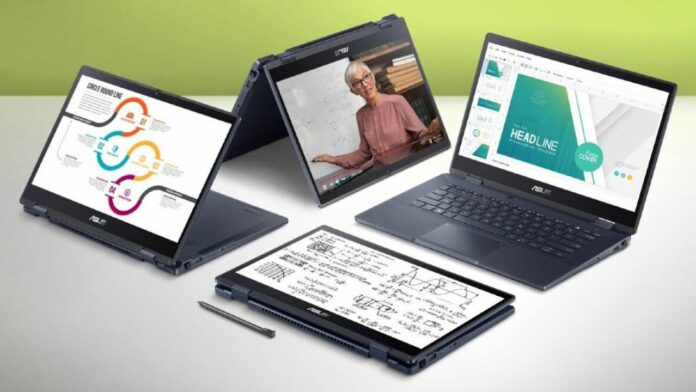 Asus has expanded its ExpertBook series lineup in India, with six new machines in India. Asus says that the laptops were created for workstations and convertibles for hybrid working. They are optimised for increased productivity as well. The six new additions include Asus ExpertBook B5 series, ExpertBook B7 Flip, B3 Flip, B2, B9 and B14.

The B7 Flip sports a 14-inch QHD+ (2560 x 1600) anti-glare touchscreen with a 16:10 aspect ratio and the first Private View display technology from the firm, which allows for a restricted 45-degree field of view to shield your screen privacy from prying eyes.

It is a 5G-enabled laptop and comes with the latest 12th Gen Intel Core i7 28-watt P-series processor. It also gets Wi-Fi 6 and Bluetooth 5.2 as additional connectivity options. There’s support for ASUS Pen which is included with the B7 Flip. Further, as the name suggests, the B7 Flip has a 360-degree hinge. To ensure maximum endurance, the anti-glare touchscreen includes Corning glass protection on top.

The ExpertBook B2 is available in two options, with 14-inch or 15.6-inch display. The 12th Generation Intel Core vPro processors powers the ExpertBook B2. It is coupled with two SO-DIMM slots for a total of 64 GB of DDR4 3200 MHz memory. Then there’s ASUS SensePoint pointing nub, an IR HD webcam with face recognition, a smart card reader, and a hardware TMP 2.0 chip.

The B3 Flip sports a 14-inch screen with TÜV Rheinland certification for minimal blue-light emissions. It gets up to 12th Gen Intel Core i7 CPU and a full range of extendable storage and I/O ports, with other features. As its a flippable device, it can be used in tablet mode with a 360-degree.

The keyboard is reinforced with an internal bracket and has a water-resistant covering, making it resistant from liquid spills of up to 400 cc without being damaged. Additionally, there’s a physical webcam shield on the B3 Flip and two-way AI noise-canceling technology that makes use of advanced machine learning algorithms and 3D noise reduction (3DNR) for enhanced audio experience.

Read More: Asus ROG Phone 6 series: Should you consider it?

The ExpertBook 14 features a 84% screen-to-body ratio. It is powered by the 12th-generation Intel Core i7 processor, up to 48 GB of RAM, support for hybrid SSD + HDD storage, coupled with a 1 TB Gen 4 SSD and a 2 TB HDD. Connectivity options include Thunderbolt 4, USB 3.2 Gen 2 Type-A, USB 2.0, HDMI, LAN, microSD, and an audio combo connection.

Additional features for increasing productivity include DisplayPort connectivity through USB-C, HDMI, and vintage VGA D-Sub — as well as the ability to connect up to two external 4K UHD displays. For increased security, it has a fingerprint sensor integrated into the power button, a protected webcam, and TPM 2.0.

The ExpertBook B9 sports a 14-inch NanoEdge display. It is powered by the 12th generation Intel Core i7 processor with Iris Xe graphics and 32 GB LPDDR5 5200 MHz memory power the ExpertBook B9 (B9400) devices. It has storage up to twin 2 TB SSDs.

As well as a webcam for video calls, an infrared camera, and a smart proximity sensor for quick biometric face login. There’s also an optional Trusted Platform Module (TPM) chip for storing passwords and encryption keys.

The device is backed by a 66 Wh battery that supports fast charging and can charge up to 60% of its maximum capacity in just 49 minutes. The laptop includes four 360-degree far-field microphones and Harman Kardon tuned speakers. There’s an integrated light bar that illuminates the interaction and is compatible with Amazon Alexa. Furthermore, it has the unique ASUS NumberPad 2.0.

The B5 series has a 14-inch Full-HD screen with an anti-glare coating. The B5 Flip has a touch-enabled display and a step-less convertible hinge technology. There’s built-in noise-canceling microphones and a numeric keypad with LED illumination on both the B5 and B5 Flip.

The Intel 12th Gen CoreTM i7 P-series 28W processor powers the laptop, alongside Iris Xe graphics and up to 40 GB of quick DDR5 RAM.