Apple announced a bunch of products at its event including a new iPhone SE, iPad Air 5, and Green finishes for iPhone 13 series. 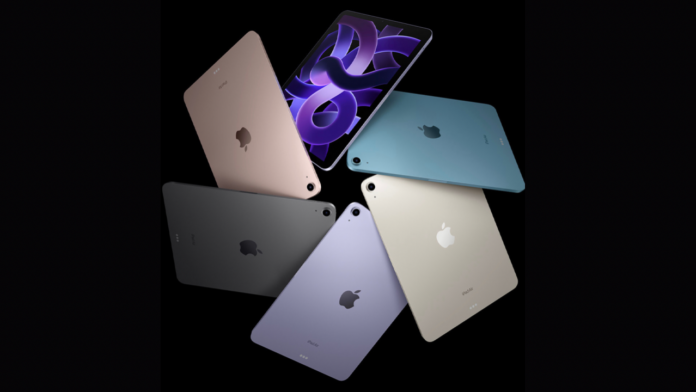 Along with the computer hardware, Apple also announced its most affordable iPhone for 2022, the new iPhone SE. Further, it also announced new green finishes for the iPhone 13 lineup as well as iPad Air 5 that comes with the M1 chip which Apple introduced in its tablet lineup with the iPad Pro model.

Lastly, the iPad Air 5 is available to order beginning Friday, March 11, from theApple Store and in the Apple Store app in 29 countries and regions, including India, with availability beginning Friday, March 18. Wi-Fi models of iPad Air are available with a starting price of Rs 54,900 and Wi-Fi + Cellular models start at Rs 68,900. The new iPad Air, in 64GB and 256GB configurations, comes in space grey, starlight, pink, purple, and blue finishes.

The iPhone SE 2022 comes with the same design as the previous generation iPhone SE from 2020 and the iPhone 8 from a few years back. It features an aerospace-grade aluminium and glass design on both the front and back. Rated IP67 for water and dust resistance, iPhone SE is designed to protect against spills. iPhone SE features the familiar Home button with Touch ID for security.

The iPhone SE 2022 is powered by the A15 Bionic SoC under the hood making iPhone SE up to 1.8x faster than iPhone 8. Apple says that the A15 Bionic works in conjunction with the latest-generation battery chemistry and tight integration with iOS 15 to enable better battery life on iPhone SE. Even with its compact form factor and new technologies like 5G, iPhone SE has longer battery life than the previous-generation and older 4.7-inch iPhone models, claims Apple.

iPhone SE is compatible with Qi-certified chargers for wireless charging, and also supports fast charging up to 20W with the power brick that is sold separately. Further, iPhone SE features an all-new camera system powered by A15 Bionic, with a 12-megapixel ƒ/1.8 aperture Wide camera that offers computational photography benefits, including Smart HDR 4, Photographic Styles, Deep Fusion, and Portrait mode. On the front, it gets a 7MP camera with f/2.2 aperture with Smart HDR 4.

Available in a new array of colors, iPad Air features a new Ultra Wide front camera with Center Stage for a more natural video conferencing experience, a USB-C port with up to 2x faster transfer speeds, and 5G on cellular models. The 8-core M1 CPU under the hood of the iPad Air 5 delivers up to 60 percent faster performance, and the 8-core GPU delivers up to 2x faster graphics performance compared to the previous iPad Air.

The Ultra Wide 12MP front camera with Center Stage automatically pans to keep users in view as they move around. When others join in, the camera detects them too, and smoothly zooms out to include them in the conversation. On the rear, you get another 12MP wide camera that can shoot 4K videos. With 5G, iPad Air can reach peak speeds of up to 3.5Gbps in ideal conditions. You also get eSIM and Wi-Fi 6 support as well.