Microsoft has finally released a Preview Build of Windows 11 with a set of 50 Android apps . 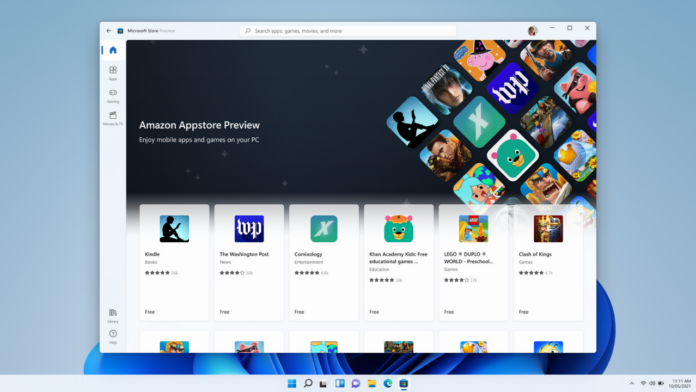 Microsoft has announced the first preview of its Android apps experience into the Windows Insider Program. The company is delivering this experience with its partners – Amazon and Intel – to Beta Channel users in the United States on eligible devices running Intel, AMD, and Qualcomm platforms.

One can open the new Microsoft Store and find a selection of mobile experiences not available on Windows before. These Android apps and games join the broader catalogue of Windows apps. It has everything from core to casual games, productivity suites to social experiences, creativity tools to niche hobbyist apps, and developer tools to entire virtualized environments.

One can easily run these Android apps side-by-side with the help of the new Snap Layouts feature, pin them to your Start menu or Taskbar, and interact with them via mouse, touch, or pen input. Android apps are also integrated into Alt + Tab and Task view to help quickly move back-and-forth between the apps that matter most to you. You can see notifications from Android apps notifications in the Action Center or share your clipboard between a Windows app and an Android app.

How did Microsoft enable working of Android apps on Windows?

To enable this experience introducing, a new component on top of Windows 11 called Windows Subsystem for Android has been introduced. It powers the Amazon Appstore and its catalogue. The Subsystem includes the Linux kernel and the Android OS based on the Android Open Source Project (AOSP) version 11.

The Windows Subsystem for Android is available across the full spectrum of Windows processor types (AMD, Intel, and Qualcomm). In addition, Microsoft is partnering with Intel to leverage Intel Bridge Technology to enable Arm-only apps to run on AMD and Intel devices.

Developers interested in publishing to the Amazon Appstore will get access to tools to debug and test their apps on Windows.