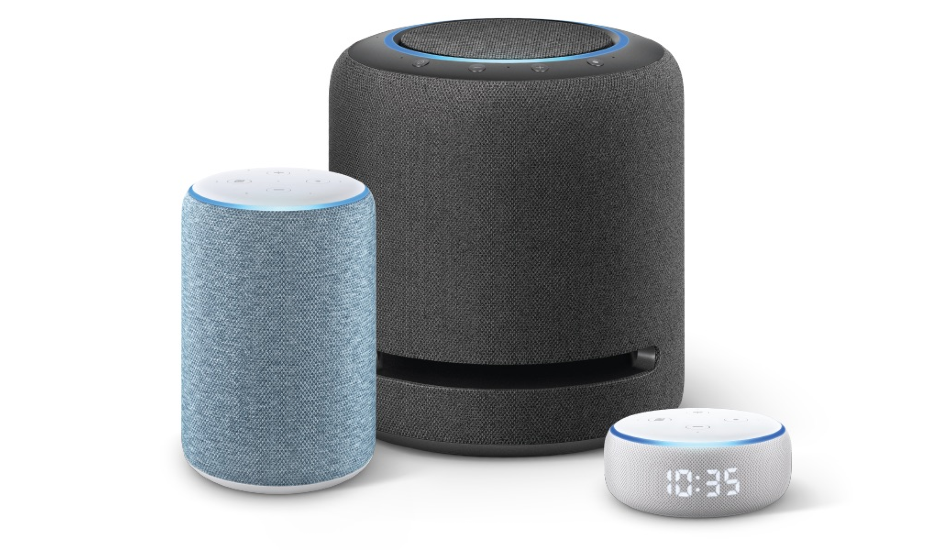 Amazon has announced the launch of three new Alexa-enabled Echo products – a new Echo, Echo Dot with clock and Echo Studio. The new devices have been designed to offer users an immersive experience with new Alexa features.

The new Echo can be purchased for a price of Rs 9,999 while the Echo Dot with clock comes in at Rs 5,499. The Echo Studio with a built-in smart home hub will be available for Rs 22,999. Customers pre-ordering either of the three devices will be able to avail a smart bulb for free and a smart plug for Rs 199. All three products are available for pre-order on Amazon India and select offline stores.

The new Echo comes with the same audio architecture as Echo Plus and features a 3-inch woofer with increased back volume. Besides that, the device comes in updated fabric design with more colour options including a new Blue model alongside the Black, Grey and White variants.

Echo Dot with the clock now arrives with an LED display for use as a bedside table or kitchen counter. The display comes with automatic brightness adjustment based on room lighting and can be used as an alarm clock. Users can tap the top of the Echo Dot to snooze an alarm. Other features include the ability to ask for outdoor temperature, set timers and alarm.

Users can connect an Echo Studio or two with an Amazon Fire TV Stick 4K for multi-channel audio playback with support for Dolby Atmos, Dolby Audio 5.1, and stereo audio. The device also comes with a built-in Zigbee smart home hub that can be used to control compatible smart home devices.

Alongside the three new devices, Amazon has announced new and upcoming features for Alexa. Alexa can now interact to users in Hindi as well as Hinglish and users can adjust the speed at which the voice assistant speaks. Other features include Recommend Routines to execute commands with a single command and asking for her responses.

Upcoming features include multilingual capabilities in the same device, whisper mode and the ability to auto-delete voice recording for privacy.

Speaking about the launch,Amazon Devices India Head,Parag Gupta said “Customers across the country have given feedback on how they love using Alexa – whether it is listening to their favorite music, playing a game with kids, watching videos on Echo Show range of devices, or controlling their smart home appliances. We are introducing new Echo devices and features to give customers even more ways to access Alexa— whether that’s through our best-sounding Echo device yet—Echo Studio, or the reimagined Echo and Echo Dot”.