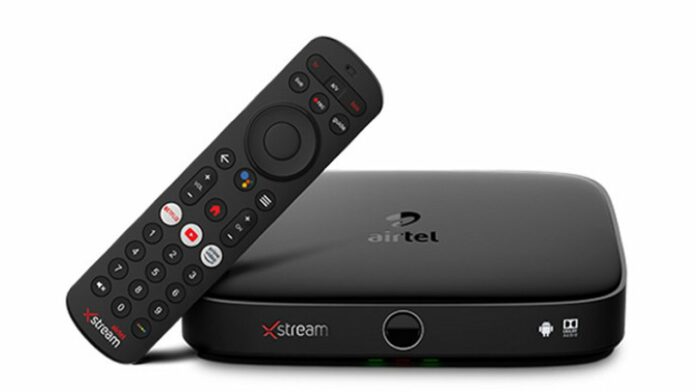 The Airtel Xstream box has now received a price cut in India. Airtel has slashed the Xstream Box’s price by Rs 499 to Rs 2,000.

The new price will be applicable to the customers getting new Airtel Digital TV connections along with the Xstream Box option. In addition, the company is also offering OTT apps. These include Amazon Prime Video, Disney+ Hotstar and more along with a direct-to-home (DTH) Set-Top Box.

The Airtel Xstream box was launched back in September 2019. The company was previously offering the box for a price tag of Rs 2,499. Now the Airtel website is displaying the price of Airtel Xstream Box as Rs 2,000. It is said to be available as a limited period offer.

The Xstream Box comes runs on Android 9 Pie OS. It combines both satellite TV and OTT content together through a single device. Along with the benefits offered to Xstream Stick users, Xstream Box will bring users the option to choose from 500 plus TV channels, Netflix, Amazon Prime Video, YouTube and Airtel Store.

The Airtel Xstream Box features WiFi and Bluetooth for connectivity and offers a built-in Chromecast option. There’s a universal remote that features Google Assistant based voice search. It also has dedicated keys for launching Netflix, Amazon Prime Video and YouTube.

Previously, Airtel introduced a new Xstream Premium service. It is a Video streaming service that bundles a bunch of OTT services into one single subscription.

Airtel Xstream Premium will be offered to the users in two plans. One will be a monthly plan where users will be able to pay Rs 149 a month to get access to the subscription. In the second plan, you can pay Rs 1,499 for an entire year and enjoy viewing content. One can download the Airtel Xstream Premium app from Playstore and Apple store as well.