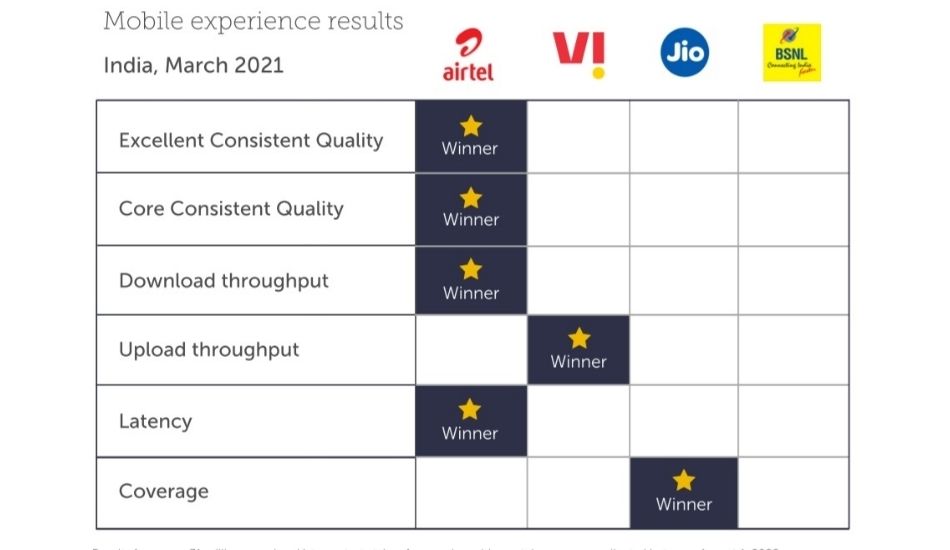 The telco war in India has been a long-standing one where all the telecom operators want to offer the best to their consumers and stay at the top. As per a new report, Airtel has managed to gain the top spot in India because it offers its subscribers the best network experience in India, as well as the fastest as per a report.

Tutela, has said in a report, Airtel has established its dominance among Indian operators winning first place in four out of the six categories that were tested. The operator had the highest Excellent Consistent Quality at 56.6% as well as the highest Core Consistent Quality of 83.7% in Common Coverage areas across the country.

For this analysis of mobile network experience across India, Tutela has analyzed over 31 million speed and latency tests taken from real-world smartphone users, collected between August 1, 2020, and January 31, 2021.

Tutela uses two key methodological components to best compare user experience across operators: Consistent Quality and Common Coverage Areas. Consistent Quality is a set of metrics that Tutela has developed to objectively evaluate when connections networks are enabling users to do almost everything that they want to do on their smartphones.

Common Coverage Areas are parts of the country where all national operators offer service, either on their own network or through a domestic roaming agreement.

Compared to 2019, Airtel was at the top position 2 years back as well with an average download speed of 8mbps while Jio was at the last with just 6.2mbps. Jio has gained a single position in these 2 years but with only a difference of 0.3 Mbps. BSNL Mobile somehow dropped to the last compared to 2019 when it was surprisingly in the second position with an average download speed of 6.8mbps.

Jio’s average upload speed has dropped again compared to two years back when it was 3.8mbps. However, even in 2019, the operator was in the last position. BSNL Mobile again dropped drastically as it was in 3rd position in 2019 with an average upload speed of 4.2mbps. Airtel managed only a marginal gain with just 0.2 Mbps more compared to 2019. On the other hand, Vodafone jumped from 4.5mbps (in 2019) to 5.2mbps this year.

Airtel effectively brought down the latency by more than half when compared to 2019 as back then, it was 50 ms. Vodafone was first in 2019 with 49.5 ms latency but dropped to the second position this year.

Jio, despite placing third in the other metrics tested, won in a new category recently added to Tutela’s reports: the operator had the best total coverage in India, meaning the total coverage on any connection technology in terms of the relative observed area covered for its subscribers compared to the other operators, with a score of 595 and last-placed BSNL Mobile’s score of 316 with the latter being heavily dependent on 3G.

Tom Luke, VP at Tutela, said: “India’s operators continue to impress us with their results, particularly with Airtel dominating in four of the six metrics tested, but also with Vodafone Idea and Jio putting up a strong fight in two other categories tested. Although the deployment of 5G may come around slower than other countries, we are impressed with how well 4G technology is utilized in the country for its customers and are confident 5G will be embraced once ready.”