After recently launching Rs 499 plan, Airtel has now launched a new prepaid plan of Rs 249 with a validity of 28 days. Alongside, the company has also revised it earlier Rs 349 prepaid plan.

The Rs 249 plan is available for open circles and one can check the plan by going to company’s official website or My Airtel App. Under this offer, Airtel customers will get unlimited voice calls on local and STD network along with free national roaming calls. The pack offers 2GB of 3G/4G data along with 100 SMS per day. So, the plan is offering a total of 56GB of data for 28 days. 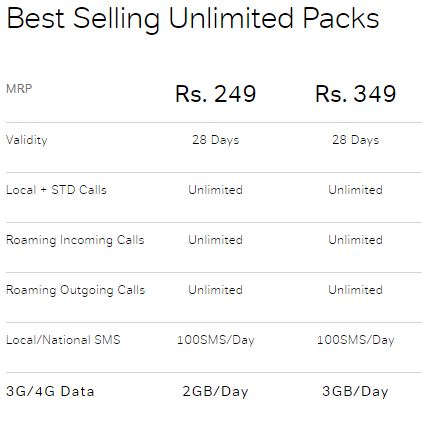 The recently launched Rs 499 plan gives a huge 164GB of 4G data for a validity period of 82 days. It offers 2GB data per day, unlimited local/STD calls, roaming calls along with 100 SMS per day. The offer is for prepaid users only.

Earlier Airtel also re-launched the Rs 649 postpaid plan.  The new Rs 649 plan now offers unlimited voice calls on local and STD networks along with unlimited incoming and outgoing on national roaming. Apart from this it also offers the 50GB of 3G/4G data per month. The plan comes with data rollover facility, so the unused data will be rolled over to next month as well. The plan earlier used to offer 30GB of 3G/4G data to its customers.

Airtel is Now Offering Unlimited Data on all Broadband Plans

Airtel Xstream service to be expanded in 50 more cities