iOS 16 will roll out later this year to compatible iPhone models. Apple has announced a wide range of updates on iOS 16. 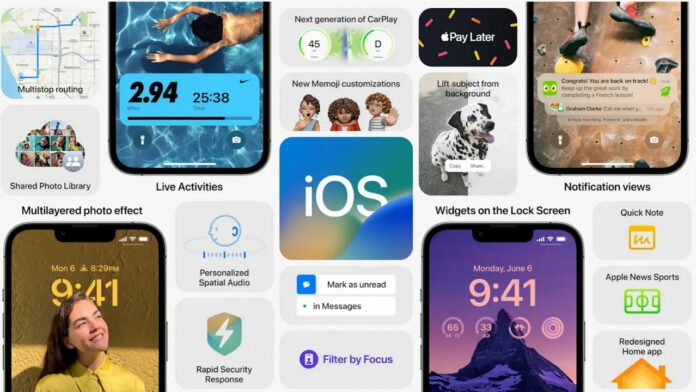 At the WWDC 2022 keynote, Apple has announced iOS 16 as the next-generation version of its operating system for compatible iPhone models. iOS 16 introduces iCloud Shared Photo Library to seamlessly share a collection of photos with family, updates to Messages and Mail that help users stay in touch with ease, and powerful enhancements to Live Text and Visual Look Up.

With the Lock Screen, users can change the look of the date and time with expressive type styles and colour choices. They can also add widgets for upcoming calendar events, workout status and choose multiple widgets, while picking wallpapers and presets from a curated selection provided by Apple.

A new Lock Screen gallery features a range of options such as Apple collections, which include Pride and Unity to celebrate special cultural moments. There is a Weather wallpaper to see live weather conditions as they change throughout the day. Then there is an Astronomy wallpaper for views of the Earth, moon, and solar system. Users can also create Lock Screens using their favorite emoji or colour combinations. With multiple Lock Screens, users can switch between their favourites with just a swipe.

Live Activities is a new feature that helps users stay on top of things that are happening in real time, such as a sports game, workout, ride-share, or food delivery order, right from the Lock Screen. Notifications have been redesigned to roll up from the bottom, ensuring that users have a clear view of their personalised Lock Screen.

Focus is easier to set up, and now connects to the Lock Screen, offering users a way to tie a Lock Screen wallpaper and widgets to a particular Focus. To activate a Focus, users can simply swipe to the corresponding Lock Screen. With Focus filters, apps like Calendar, Mail, Messages, and Safari can display only the content that is relevant to a user’s Focus, helping them to find better balance.

Users can edit or recall recently sent messages, recover recently deleted messages, and mark conversations as unread so they can come back to them later. In addition, SharePlay is coming to Messages, making it possible to enjoy synced content like movies or songs and shared playback controls all while chatting in Messages.

Now users can schedule emails ahead of time and are even given a moment to cancel delivery of a message before it reaches a recipient’s inbox. Mail detects if the user forgot to include an important part of their message, such as an attachment. Users also have the option to resurface a message at any date and time with Remind Later, and Follow Up suggestions automatically remind users to follow up on an email if they have not received a response. Mail also includes the biggest overhaul to search, and uses state-of-the-art techniques to deliver more relevant, accurate, and complete results. Users see recent emails, contacts, documents, and links the moment they begin to search for emails.

Live Text and Visual Look Up

Live Text uses on-device intelligence to recognise text in images across iOS, and it is now expanding to include video. Users can pause a video on any frame and interact with text. Live Text also adds the ability for users to quickly convert currency, translate text, and more.

Visual Look Up takes photos further by introducing a new feature that allows users to tap and hold on the subject of an image to lift it from the background and place it in apps like Messages. Visual Look Up also expands to recognise birds, insects, and statues.

The Pay Later provides users in the US with a seamless and secure way to split the cost of an Apple Pay purchase into four equal payments spread over six weeks, with zero interest and no fees of any kind. Built into Apple Wallet and designed with users’ financial health in mind, Apple Pay Later makes it easy to view, track, and repay Apple Pay Later payments within Wallet.

Keys and IDs in Wallet get expanded support. Users can use their ID in Wallet for apps requiring identity and age verification. To ensure a private and secure experience, only the necessary information required for the transaction will be provided to the app, and the user can review and consent to share it using Face ID or Touch ID. Additionally, users can securely share their home, hotel, office, and car keys in Wallet through messaging apps, including Messages, Mail, and more.

iCloud Shared Photo Library gives families a new way to share photos seamlessly with a separate iCloud library that up to six users can collaborate on, contribute to, and enjoy. Users can choose to share existing photos from their personal libraries, or share based on a start date or people in the photos. A user can also choose to send photos to the Shared Library automatically using a new toggle in the Camera app.

Apple has announced updates for parental controls. It includes suggestions for age-appropriate restrictions for apps, movies, books, music, and more, and a simpler process for setting up a new device that applies existing parental controls automatically. When a child asks for more screen time, guardians can approve or decline right in Messages.

A new privacy tool called Safety Check can be helpful to users whose personal safety is at risk from domestic or intimate partner violence by quickly removing all access they’ve granted to others. It includes an emergency reset that helps users easily sign out of iCloud on all their other devices, reset privacy permissions, and limit messaging to just the device in their hand. It also helps users understand and manage which people and apps they’ve given access to.

CarPlay will be able to provide content for multiple screens within the vehicle, creating an experience that is unified and consistent. Deeper integration with the vehicle will allow users to do things like control the radio or change the climate directly through CarPlay, and using the vehicle data, CarPlay will seamlessly render the speed, fuel level, temperature, and more on the instrument cluster.

Users will be able to personalize their driving experience by choosing different gauge cluster designs, and with added support for widgets, users will have at-a-glance information from Weather and Music right on their car’s dashboard. More information about the next generation of CarPlay will be shared in the future, and vehicles will start to be announced late next year.