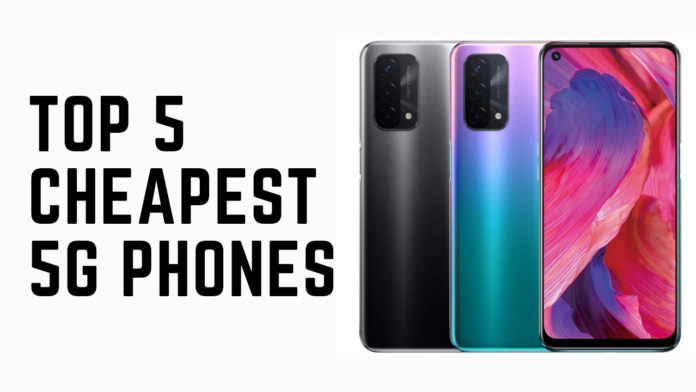 As the Indian government works towards bringing 5G to the country, smartphone manufacturers have long been ready. However, 5G phones were a bit expensive if we talk about situations pertaining even a year ago. But now, things have changed and the market is filled with 5G phones ranging from cheapest to the priciest. We’ll be taking a look at the top 5 cheapest 5G phones today that you can buy right now:

Xiaomi makes an appearance in almost every price segment and it is no different this time. The Redmi Note 10T 5G is priced at Rs 13,999 for the 4GB+64GB variant, Rs 15,999 for 6GB+128GB. It is the most affordable among the top 5 cheapest 5G phones you can get in India right now. Hence, exists in our top 5 list.

In terms of cameras, the phone comes loaded with a triple camera setup. There is a combination of a 48-megapixel primary sensor, a 2-megapixel depth sensor and a 2-megapixel macro sensor. In addition, it features an 8MP front camera inside the hole-punch cutout.

The phone is powered by the MediaTek Dimensity 800U chipset which will be assisted by up to 8GB RAM and 128GB onboard storage. Narzo 30 Pro is also equipped with 3-card slots for two SIM cards and one SD card (up to 256GB).

Poco M3 Pro 5G runs MIUI 12 based on Android 11 and packs a 5,000mAh battery with 18W fast charging support. There is a side-mounted fingerprint sensor on the Poco M3 Pro 5G and AI Face Unlock support.

The iQOO Z3 5G packs a 4400mAh battery with 55W fast charging support. It can charge the phone up to 50% in 19 minutes and 100% in less than an hour. There’s a side-mounted fingerprint sensor and facial recognition support as well.

In terms of cameras, it comes with a triple-camera setup at the back panel with a combination of a 64-megapixel Samsung ISOCELL GW3 sensor, f/1.79 aperture, an 8-megapixel ultra-wide camera with f/2.2 aperture, and a 2-megapixel depth sensor with f/2.4 aperture. The iQoo Z3 has a 16-megapixel selfie camera sensor at the front with f/2.0 aperture for selfies and video chats.

For security, there is a side-facing fingerprint scanner. A Qualcomm Snapdragon 480 chipset powers it. It is paired with 8GB of RAM and 128GB/256GB onboard storage. The storage is further expandable through a microSD card. The Oppo A74 5G runs Android 11 and is backed up by a 5,000 mAh battery with 18W fast charging support.

The phone has a triple-camera setup with a combination of a 48-megapixel main camera, a 2-megapixel portrait lens, and a 2-megapixel macro camera. For the front, there will be an 8-megapixels camera for selfie and video-calling.

While the above mentioned Top 5 cheapest 5G phones are available in the market, the ones mentioned below are a bit higher on the budget but provide you with even more value.

In addition, it comes with 6GB/8GB of RAM and 128GB of storage which can be expanded up to 1TB via a microSD card. Further, a 5,000mAh battery backs the smartphone with support for 15W fast charging. As for software, it runs OneUI Core 3.1 based on Android 11.

For photos and videos, the phone comes with a triple rear camera setup. It has a 48MP primary main camera with f/1.8 aperture, a 5MP ultrawide lens with f/2.2 aperture, and a 2MP depth sensor with f/2.4 aperture. In addition, it has a front camera of 8-megapixel for selfies.

Launched on July 23rd, the Poco F3 GT has one of the lowest price tags when it comes to mid-premium smartphones. In addition, Poco has launched this smartphone with a unique pricing structure.

The phone features a 6.67-inch AMOLED display FHD+ (2400 x 1080 pixels) display. Further, the display comes with a 120Hz refresh rate, a 480Hz touch sampling rate, 500-nits peak brightness, and Gorilla Glass 5 protection. Additionally, there is HDR 10+ and DC Dimming. Poco F3 GT packs the MediaTek Dimensity 1200 SoC with up to 12GB of LPDDR4x RAM and up to 256GB of UFS 3.1 storage. The storage is expandable via a microSD card.

As for software, the handset runs Android 11 based on MIUI 12.5. There’s also a 5,065mAh battery with 67W fast wired charging support. In addition, it includes a side-mounted fingerprint scanner for security. The phone also has face recognition as well.

For photos and videos, the phone comes with a triple rear camera setup. It has a 64-megapixel /1.65 aperture primary camera, 8MP ultra-wide camera with f/2.2 aperture, 119° FoV and a 2MP macro camera. For selfies and video calls, the device uses a 16-megapixel shooter.

The phone is powered by an octa-core Qualcomm Snapdragon 750G SoC that has a maximum clock speed of 2.2GHz. The chipset is coupled with up to 8GB RAM and 128GB storage. In addition, the storage is expandable up to 1TB via micro SD card.

Samsung Galaxy M42 5G is fuelled by a 5000mAh non-removable battery with 15W maximum charging technology. It runs Android 11 with One UI 3.1.