The device will be an LTE/WCDMA tablet.

ZTE seems to be working on its next tablet as an unannounced ZTE tablet which bears the model number as ZTE-K92 has got the Bluetooth certification from the Bluetooth Special Interest Group (SIG).

Sadly, the listing does not reveal anything about the hardware specifications of the tablet. The listing only reveals that the tablet has received Bluetooth certification with version 4.2 and it will be an LTE/WCDMA tablet. 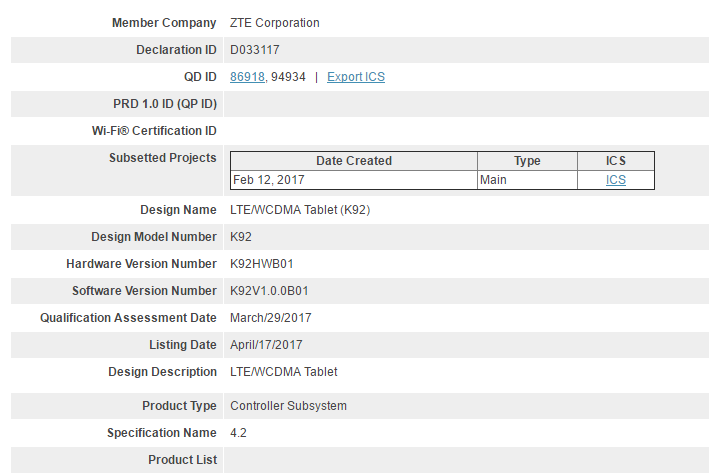 Sadly, no more details about the tablet are known at the moment but since now the tablet has started surfacing online we expect more leaks to come up in the coming days. We will keep you posted once we get more updates on this.

Last month, ZTE Z986 was spotted on GFXBench benchmarking website which revealed some key specifications of the ZTE’s upcoming device. As per the listing on GFXBench, ZTE Z986 has a 6-inch display and 1920×1080 pixels resolution and 5 finger gesture support. It is powered by Qualcomm Snapdragon 625 octa-core processor and 2GB RAM. The ZTE Z986 offers 16GB of internal storage out of which 9GB will be reserved for the users. Besides, it has Adreno 506 GPU and Android 7.1.1 Nougat operating system. The listing, however, does not mention anything about the battery.

As per the benchmark listing, the ZTE Z986 has a 13-megapixel autofocus camera and a LED flash on its rear panel while a 5-megapixel camera is in its front. The rear camera has features like autofocus, face detection, HDR photo and touch focus. The GFX listing shows that the device has connectivity features like Bluetooth, GPS, and WiFi. As per the listing, the device has accelerometer, light, proximity and gyroscope sensors as well.