Xiaomi has confirmed that Mi CC9 Pro will come with 5,260mAh battery with support for 30W fast charging.

Xiaomi is all set to launch Xiaomi Mi CC9 Pro smartphone on November 5 in China. Now ahead of the launch the battery capacity of the phone has been revealed.

The Xiaomi Mi CC9 Pro was recently spotted on TENAA with its entire specifications as per which the phone’s battery is of 5,170mAh. Now, as per the official confirmation, its typical capacity is 5,260mAh. 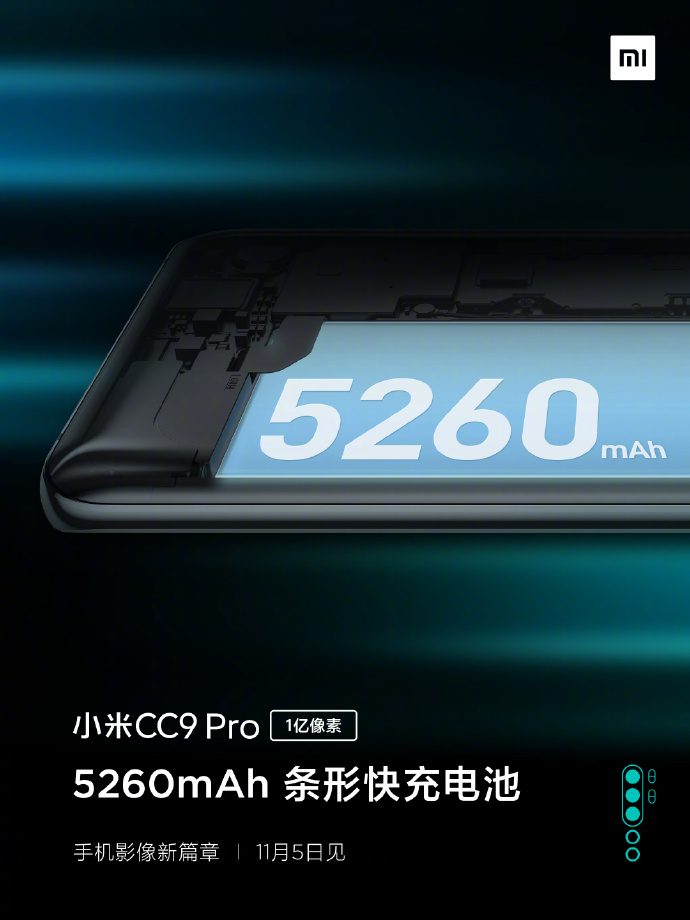 Xiaomi Mi CC9 Pro was recently spotted on TENAA certification websiterevealing its entire specifications.Xiaomi Mi CC9 Pro will feature a 6.47-inch full HD+ OLED display with 1080 x 2340 pixels resolution and a tall aspect ratio of 19.5:9. The display will come with an in-screen fingerprint sensor. It will be powered by 2.2GHz octa-core processor which is likely to be 8nm Snapdragon 730G.

Xiaomi Mi CC9 Pro will be the first smartphone from the company to arrive with support for 5x optical zoom. The phone will feature the Samsung 108-megapixel as the primary sensor. The latest teaser of the Mi CC9 Pro revealed the camera details of the phone.

The first lens in the five camera setup will be a periscope sensor supporting 5x optical zoom, 10x hybrid zoom and 50x digital zoom. The second lens is a 50mm portrait lens of 12-megapixel with a 1.4micron pixel size of, dual PD autofocus and f/2.0 aperture. The third lens is a Samsung-made 108-megapixel lens with a 1/1.33-inch sensor and f/1.7 aperture. The fourth one is a 20-megapixel superwide lens with 117-degree field-of-view. The last one is a super macro lens with a focal length of 1.5cm. It will have a 32-megapixel front camera.