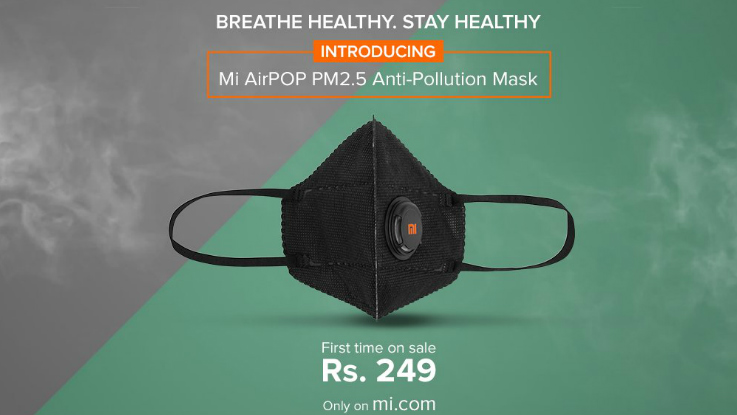 The air mask will go on sale on the company’s official website starting from today at 12:00 PM.

Xiaomi has today announced the launch of a new anti-pollution mask in India. Dubbed as Mi AirPop PM 2.5 Anti-Pollution Mask, it comes with a price tag of Rs 249 for a pack of two.

The air mask will go on sale on the company’s official website starting from today at 12:00 PM. The company confirmed this news on its official Twitter account. The tweet reads, “Beat the pollution with Mi AirPOP PM2.5 Anti-Pollution Mask! Goes on sale for the first time in India at 12 noon only on http://mi.com. Get yours today.” As the name suggests, the new air mask will filter out impurities present in the air, including the small PM 2.5 particles.

Beat the pollution with Mi AirPOP PM2.5 Anti-Pollution Mask! Goes on sale for the first time in India at 12 noon only on https://t.co/D3b3Qt4Ujl. Get yours today.
RT to spread the word. pic.twitter.com/m0if5XRLzW

The anti-pollution mask is made for everyday wear and it comes sufficient space for breathing. There is a large-diameter screw value that not only blocks pollutants but quickly discharges hot gas and water vapour.The air mask comes with double particle protection and it features four-layer filtration. There is a primary layer that blocks out large particles, then there is mesh support that provides the 3D structure. Then comes electrostatic micro-filtration layer that blocks out particles that are less than 0.3 microns in diameter and lastly, there is a water-permeable layer with hypo-allergic design to reduce vapour build up. The mask is made with a non-woven micro-filtration material that is soft, light and skin-friendly.

Meanwhile, Xiaomi has announced that some of its Mi LED TVs in India are receiving permanent price cuts following the latest modification by the Indian government to change the application of GST on TVs. Among the TVs receiving the price cut is the Mi LED Smart TV 4A 32, Mi LED TV 4C Pro 32 and Mi LED TV 4A Pro 49.

The latest price drop announcement comes just two months after Xiaomi inflated the prices of its smartphones and Mi TVs. The older Mi LED Smart TV 4A which was released earlier last year, receives a Rs 1,500 price cut and is now available at Rs 12,499. The Mi LED TV 4C Pro 32 which debuted in the second half of 2018 will now be available for purchase for Rs 13,999, following a Rs 2,000 price cut.