Xiaomi Mi 10 Youth Edition will feature a square-shaped camera setup at the back.

Xiaomi has announced that it will launch Mi 10 Youth Edition at an event in China on April 27. Alongside the company will also announce MIUI 12 at the event.

Xiaomi has put out an official post on Weibo which reveals some of the specifications of the upcoming device. It is likely that Mi 10 Youth Edition is the same device as the Xiaomi Mi 10 Lite 5G which was launched in Europe last month. 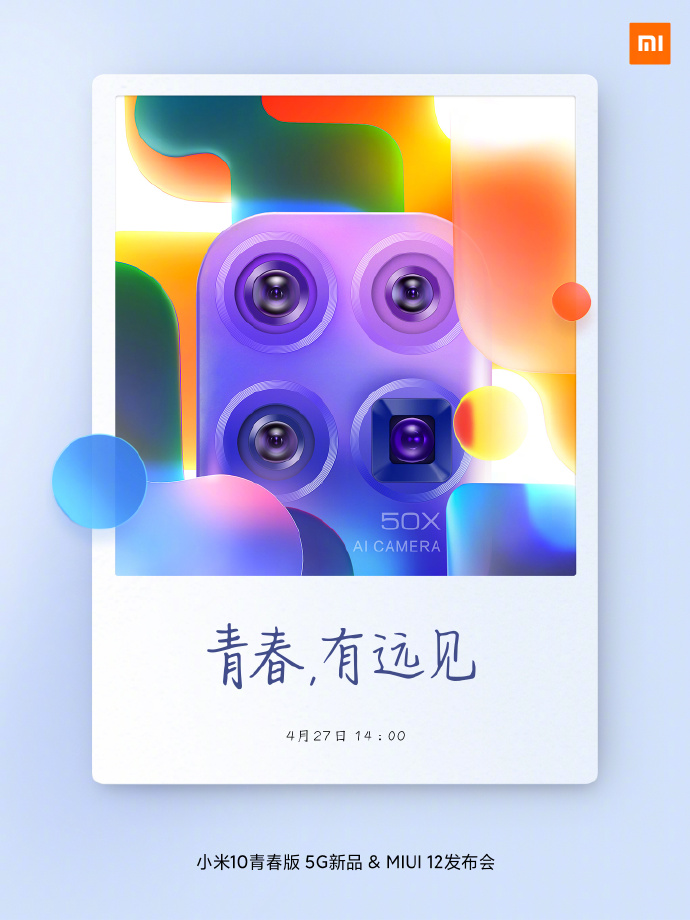 As per the poster shared by the company, Xiaomi Mi 10 Youth Edition will feature a square-shaped camera setup at the back. The fourth sensor is a square-shaped lens which indicates that it has a periscope zoom lens that will enable up to 50x zoom on the device. It is however to be noted that the European edition does not have a periscope zoom lens. So the new phone could be coming with enhanced camera setup.

A tipster by the name Digital Chat Station had claimed that the Mi 10 Lite 5G for China will have a thickness of 7.98mm and it weighs 192 grams. The device is rumoured to house a 4,160mAh battery.

To recall, Xiaomi Mi 10 Lite 5G in Europe features a 6.57-inch Full HD+ AMOLED display with the waterdrop-style notch and it is powered by the 2.4GHz octa-core Qualcomm Snapdragon 765G SoC. The phone is backed by a 4,160mAh battery that supports 20W fast charging.

Xiaomi Mi 10 Lite 5G has a quad rear camera setup that includes a 48-megapixel main lens, an 8-megapixel ultrawide shooter, a 5-megapixel macro lens and a 2-megapixel depth sensor. It has a front camera of 16-megapixel.