An unannounced Xiaomi smartphone which goes by the model name ‘Xiaomi Berlin’ has been spotted on a GeekBench benchmarking website. The listing has spilt some beans on the expected specifications of the upcoming smartphone.

In the GeekBench listing, the XiaomiBerlin got 1155 points in single-core test and in multi-core test it received 2738 points. As per the listing on Geekbench, the XiaomiBerlin has 3GB RAM and Qualcomm Snapdragon 632 1.02 GHz hexa-core processor. The handset is based on the Android 7.1.2 Nougat operating system. From the specs, we expect Xiaomi Berlin could be an entry-level or mid-range smartphone. 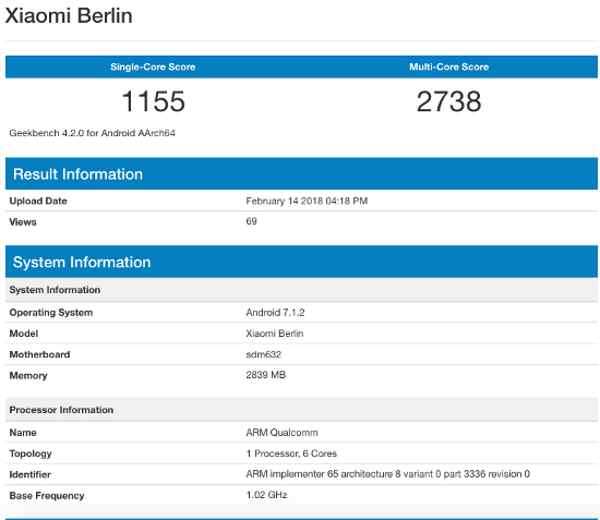 Meanwhile, Xiaomi is getting ready to launch a new smartphone in India on March 14 which is said to be Xiaomi Redmi 5. To recall, the brand introduced the Redmi 5 and Redmi 5 Plus in China in December last year. The Redmi 5 comes in two storage variants- 2GB RAM with 16GB of internal storage variant is priced at 799 Yuan, which is approximately Rs 7,795 and for 3GB RAM with 32GB of internal storage version one has to pay 899 Yuan (approximately Rs 8,770).

Note – The Lead pic is for the repsentational purpose only.