The 125cc scooter comes with many segment first features.

Honda launched the Honda Grazia in India in November last year. The 125cc scooter comes with many segment first features.The scooter is modern and trendy and is aimed at the urban youth. It offers power and convenience at the same time. Today we will find out who all should buy the Honda Grazia

The Grazia is based on the Activa 125. It is the seventh scooter by Honda in India. Both use the same 124.9cc engine producing 8.5 bhp and 10.5 Nm of torque. Something which is not borrowed from the Activa 125 is its styling. The Grazia has received substantial upgrades in its appearance. To start with the body of the Grazia is made of plastic and its 1kg lighter than the Activa 125 and weighs just 107kg. It has a 5.3-litre fuel tank. It gets a 190mm single front disc brake and a 130mm drum brake at the rear. It also uses Honda’s Combi Braking System (CBS) which applies both the brakes. At the front, there is a 12-inch tubeless tyre whereas the rear gets a 10-inch tubeless tyre. Both are from MRF.

The Grazia gets angular lines and a new wide headlamp. The headlamp is all-LED which is a first in the scooter segment. The front nose is now sharper and gets black and brushed silver plastic inserts. The bike is available in six bright metallic colours.

The side panels get upward lines. It also gets carbon fibre like plastic touches. The scooter also gets the Honda decal below the footboard. The alloy wheels are finished in black. 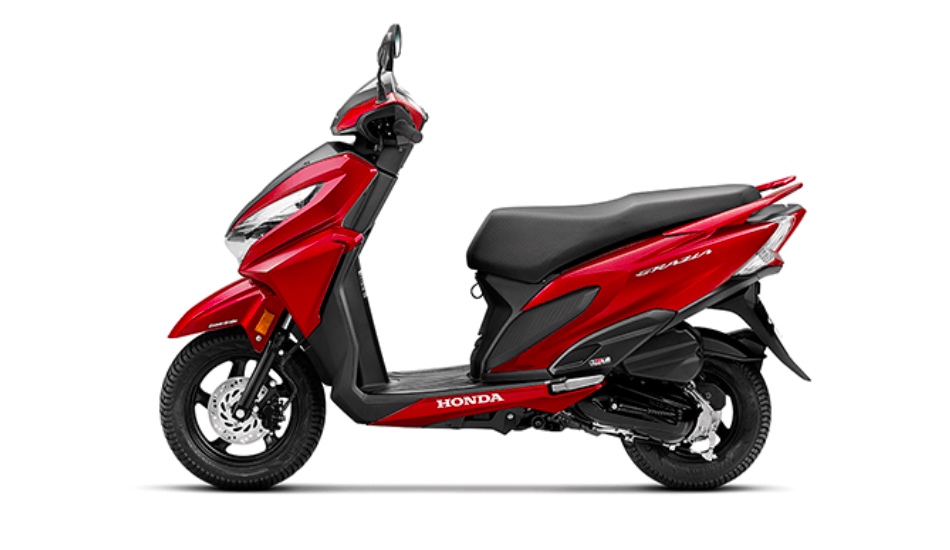 As said earlier the scooter has many segment first features. This includes a 3-step eco mode indicator that helps in improving the fuel efficiency of the scooter. The Grazia is the only scooter to get an all-digital console and a tachometer. It also gets a separate display which houses the trip meter, clock, odometer and the fuel gauge. The Grazia also gets a separate switch for unlocking the seat and a mobile holder. The mobile holder also gets an optional mobile charging socket.There are 18 litres of storage under the seat. The scooter is expected to give a mileage of 50kmpl.