A new WhatsApp feature has been spotted that suggests the company will allow users to pause the voice recording messages while they are being recorded. 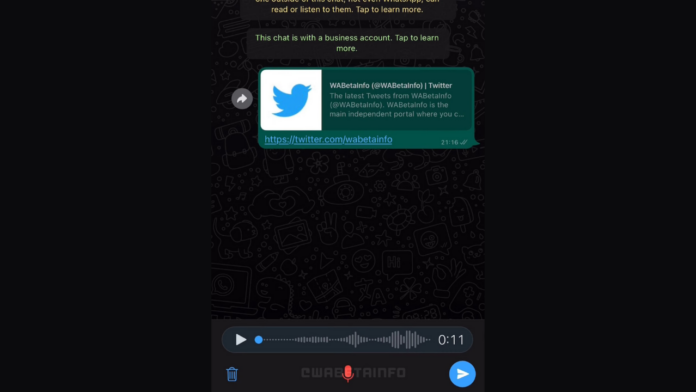 WhatsApp is said to be working on a new feature where one will be able to pause recording voice messages. The feature is said to be made available soon to beta users, however, an exact timeline hasn’t been revealed. This feature will help the users prevent stopping a recording and then record it again altogether.

The feature was spotted by WABetaInfo as per whom, after stopping the recording of the voice messages in WhatsApp, you will find another record button. After you click on it, you will be able to resume recording the voice note. The feature is being developed both for WhatsApp for iOS and Android. It will be first available to beta testers.

There’s no information as to when the feature will make its way to the app. Additionally, the company is also working on redesigning the contact info section in a future update. The new design will show a chat, audio and video option below the contact name. Moreover, a fix for the Google Drive backup issue has now been found where the backup got stuck on 100% and didn’t finish properly.

The issue was found by a Reddit user torojet and was spotted by WABetaInfo. To solve the issue, one can follow the steps mentioned below:

This will solve the Google Drive backup issue.