WhatsApp is working on bringing disappearing messages to its platform, to send sensitive information to someone with the assurance that it won’t be accessible permanently.

WhatsApp is testing a new feature on its message sharing platform. The new feature, inspired by Snapchat is the introduction of self-destructing messages which means messages will disappear after a specific period of time.

WhatsApp is working on bringing disappearing messages to its platform, reports WABetaInfo. The feature can be used to send sensitive information to someone with the assurance that it won’t be accessible permanently. 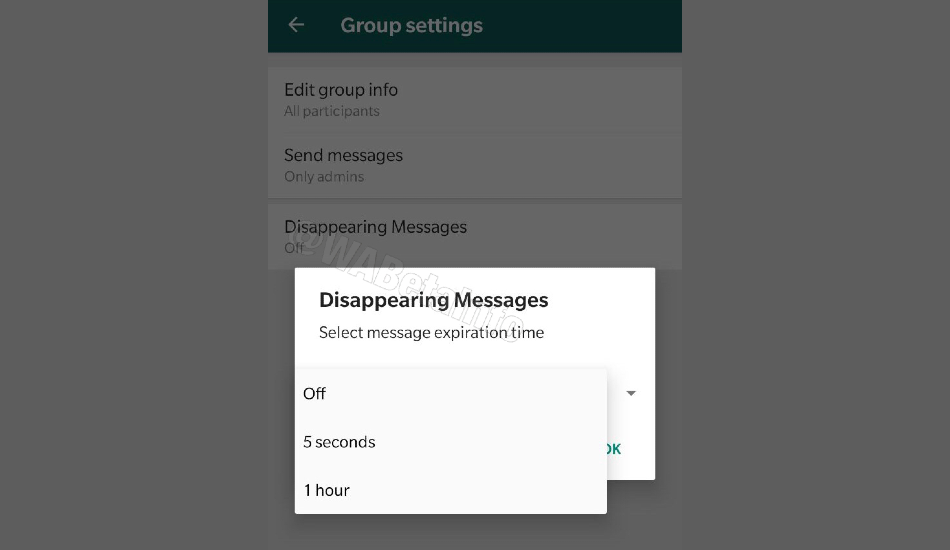 The feature made its first appearance in WhatsApp Beta version 2.19.275 on Android, though it’s important to note that not everyone on beta might be able to use the feature.

Currently, the feature lets you delete messages after 5 seconds or one hour. With disappearing messages, users will be able to set a time period after which the selected messages will disappear.

The screenshots shared show that Disappearing messages will be available inside group settings but there’s no reason as to why the feature won’t be available in private chats as well.

The Disappearing messages feature is reportedly in alpha phase and thus, it’ll be a while till it rolls out for everyone on WhatsApp.

WhatsApp Payments to launch by the end of the year: Report

WhatsApp status can now be shared directly on Facebook

WhatsApp failed to block misinformation during elections in India