WhatsApp Multi-device feature is now rolling out via beta. The feature brings the ability to use WhatsApp without primary device having internet access. 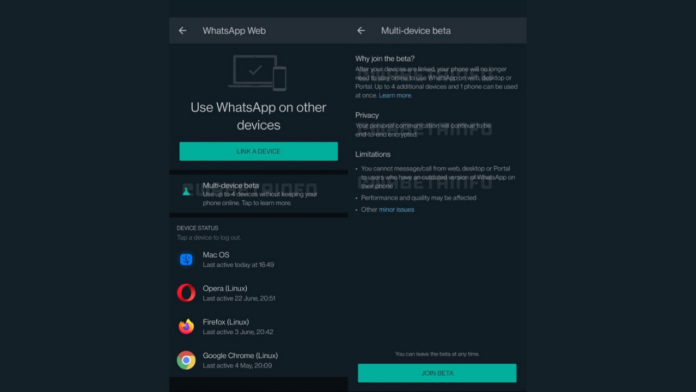 WhatsApp Multi-device feature has been in the works for a while. Finally, the feature is now being made available to a limited set of users through beta. The feature brings the ability to use WhatsApp on secondary devices even when the primary device on which WhatsApp is installed has no internet connection.

How to check if you have multi-device feature?

The report comes from the usual feature tracker, WABetaInfo. As reported earlier, the feature will initially be available to use only on WhatsApp’s desktop app and web portal. However, if you are one of those who have got the feature, you can check by opening WhatsApp Web/Desktop Settings from your iPhone or Android device. If the feature is enabled for your WhatsApp account, you can see a new option called “Multi-device beta”.

The beta program for this particular feature will have to be joined manually. One can opt-out at any given time. Once joined and connected to Web/Desktop for the first time, you will start using a beta version of the web/desktop client. As it’s a beta, you might experience some issues at the moment while chatting with those who have an older version of the app. To resolve these issues, you might have to ask the other person to update their app to the latest version.

To clear things out, the tracker confirms WhatsApp isn’t storing any chat on the cloud. When you create a new session, your chat history is transferred from your phone to the linked device, and this process is encrypted. The keys are then deleted once this process completes.

WABetaInfo informs that WhatsApp is using a client-fanout method to achieve encryption when using a multi-device feature. In this method, the message is encrypted individually using the established pairwise encryption session with each device. It is then sent to all your other companion devices and other people’s devices.

Along with this, WhatsApp has also implemented new features for syncing actions. For example, starring a message will be synced across different devices. However, it won’t get deleted from the linked device when deleting a chat or a message. This is because the server securely stores a copy of the data, which is again encrypted. The keys used to encrypt the information and metadata about these events constantly change.

Some more things to know include WhatsApp logging you out of your previous sessions if you connect to a PC using a multi-device feature. Secondly, linked devices are automatically logged out from your WhatsApp account after 14 days of inactivity on your phone due to security reasons. More fixes for issues will be available in the future.